New York Rangers legend and icon Henrik Lundqvist should be a first-ballot Hall of Famer for the Class of 2023 when votes are taken this June.

While it’s not a given, his otherworldly stats while tending goal in one of the sports world’s most pressure filled markets has to be a factor. Another consideration for inclusion in Lundqvist’s first year of eligibility is the fact his career was cut short by a heart condition that required surgery at the age of 37.

In contrast, Martin Brodeur played until he was 42 and recently inducted Roberto Luongo finished at age 39. I believe with another two years of playing, Henrik would’ve cracked 500 wins.

“The pursuit of becoming the best was always part of my journey,” Lundqvist said at his jersey retirement ceremony. “When I look back at my 15 years here, what gives me the most satisfaction is not the wins or the personal recognition, but really the commitment. The commitment I felt for the New York Rangers and the commitment they showed me for so long.”

The King, as he was dubbed by the New York Post’s Larry Brooks very early in his career lived up to the moniker. From 2005 to 2020, Henrik Lundqvist ruled the crease at the World’s Most Famous Arena.

“While I reflect on my time here in New York, everything I experienced, the people I met, and what the game has given me, I keep coming back to one feeling– gratitude,” he told the Garden Faithful as his Number 30 was raised to the rafters. “I feel so grateful for everything this organization has given me, supporting me and my family.”

When he was forced into retirement due to his heart, Henrik Lundqvist had 459 career wins to his credit. That was first among all New York Rangers goalies in their history, first among all European born net minders in the NHL and sixth overall.

Henrik also has a Vezina Trophy to his name that he won during the 2011-12 campaign.

Another key factor to get into the Hockey Hall of Fame is what Lundqvist accomplished on the International stage. By winning an Olympic Gold Medal with Sweden in 2006, plus a Silver Medal in 2014 it should be enough to get him in on his first try. You can also add a World Championship in 2017 for good measure.

Henrik was part of several great Rangers teams that went to the Eastern Conference Finals three times and one trip to the Stanley Cup Final. Although the team lost the Cup in 5 games to the Los Angeles Kings in 2014, Lundqvist was heroic in that series with a 2.46 GAA and .923 save percentage.

For his brilliant career, Lundqvist was always the MVP of the team and carried his squads as far as they could go without ever having enough offensive support to win that elusive Stanley Cup.

“All the greats play the Garden, but very few have played and dominated the way you have,” Kevin Weekes said at Lundqvist’s ceremony. “Next stop, the Hockey Hall of Fame.”

Hey, I think this is the earliest Breaking News story by Weekes in his broadcasting career. 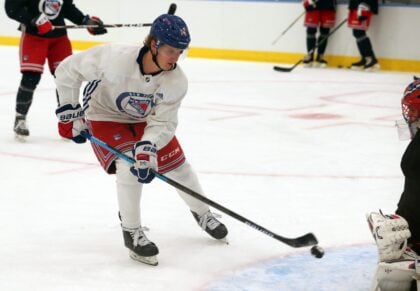