How to watch New York Rangers vs New Jersey Devils, plus matchup notes

How to watch the New York Rangers versus the New Jersey Devils as they meet at Madison Square Garden.

How to watch, listen, stream: Rangers vs Devils

SiriusXM subscribers can listen to the game on Channel 221.

The Rangers are riding a seven-game winning streak against the Devils over the last calendar year and have outscored them, 33-13.

Artemi Panarin – 22 GP, 10G-21A – 31P – Panarin has points in five of his last six games against the Devils (4 goals, eight assists). He has posted nine multi-point games in his last 17 contests against New Jersey (eight goals, 19 assists), including five multi-point games over the last eight contests against the Devils (five goals, 10 assists). Panarin’s 31 points against New Jersey are his second most against one team (PHI – 34).

Mika Zibanejad – 32 GP, 11G-19A—30P – Zibanejad has points in four of his last five games (2G-5A) against New Jersey and in nine of his last 12 games against them (5G-9A). Zibanejad’s 30 points against the Devils are his most against one team in the NHL.

Comeback Kids: The Blueshirts are tied for most comeback wins in the NHL at 18. 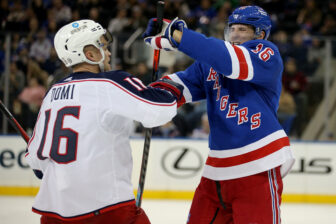 Chris Kreider is 2 points from tying Anders Hedberg (397) for the 17th most points in team history and 5 points from 400 points in career.