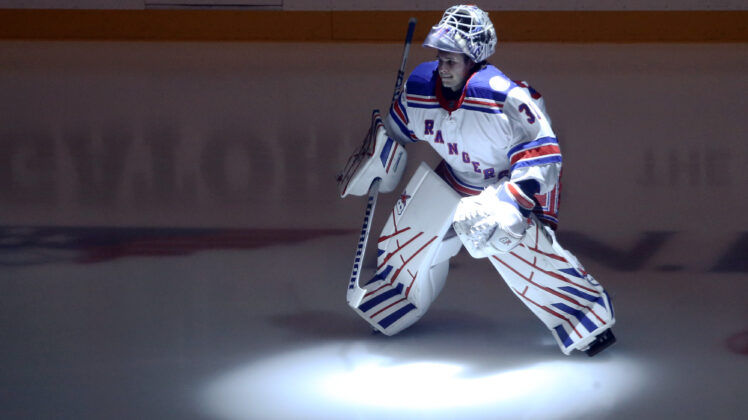 May 7, 2022; Pittsburgh, Pennsylvania, USA; New York Rangers goaltender Igor Shesterkin (31) takes the ice to warm up before the game against the Pittsburgh Penguins in game three of the first round of the 2022 Stanley Cup Playoffs at PPG Paints Arena. Mandatory Credit: Charles LeClaire-USA TODAY Sports

Igor Shesterkin is up for two major honors at the NHL Awards Show on Tuesday night. The live event will be held at Armature Works in Tampa and hosted by actor Kenan Thompson of SNL fame. He also played Russ Tyler in Mighty Ducks 2 becoming famous for his knuckle puck shot.

Five major awards will be presented with the Hart Trophy, Vezina Trophy, Norris Trophy, Calder Trophy, and Ted Lindsay Award up for grabs. The show starts at 7 PM ET on ESPN.

Shesterkin is expected to be named the winner of the Vezina for best goalie and has an outside chance at the Hart as league MVP.

His competition for the Vezina are Calgary’s Jacob Markstrom and Nashville’s Juuse Saros. For the Hart it is Edmonton’s Connor McDavid and Toronto’s Auston Matthews.

Shesterkin, 26, posted a 36-13-4 record to lead the Rangers to second place in the Metro Division and the Eastern Conference Final. His .935 SV% and 2.07 GAA led the league in both categories for the regular-season.

His save percentage was the best for a Rangers goalie in a single season with a minimum of 30 appearances. According to the Rangers Press Release: “Among goaltenders who played 50 or more games, Shesterkin had the third highest save percentage in NHL history behind Tim Thomas (2010-11 – .938) and Dominik Hasek (1998-99 – .937). Both Thomas and Hasek won the Vezina Trophy in those seasons.”

In other words, he was otherworldly as a goalie in a season where goal scoring was up. Per Hockey-Reference, in 2021-22 the 3.14 goals per game average matched the output of the 1995-96 campaign. The NHL has only cracked over 3 goals per game three other times in that 26 year span.

Should Igor win the Vezina, he will be only the sixth Rangers goalie in franchise history to do so:

The last New York Rangers goalie to win the Vezina Trophy was legendary franchise goalie Henrik Lundqvist in 2012. That season, The King posted a 39-18-5 record with a jaw-dropping 1.97 GAA and a stellar .930 SV% (the highest of his 15 year career).

Mark Messier was the last Ranger to win the Hart Trophy during the 1991-92 season. Shesterkin is the fifth Rangers goalie to be nominated for the award. If he wins, he’d be the first to do so since Chuck Rayner. 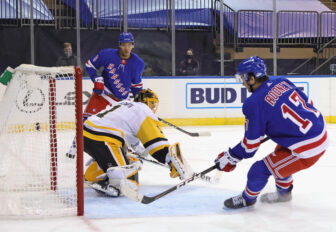