Over the last several days, several potential trade targets for the New York Rangers have hit the injured list. Any injury will muddy trade waters and that’s what Chris Drury is dealing with at the moment.

Add in the fact that two of his top trade assets are declining in value every day doesn’t make anything easier. Both Vitali Kravtsov and the team’s first round pick in 2022 are trending down.

So with the NHL Trade Deadline just six days away, how will that impact what the Blueshirts do? It’s an interesting question that is worthy of exploring.

On Monday, Coyotes defenseman Jakob Chychrun and Golden Knights forward Reilly Smith landed on IR. Andrew Copp of the Winnipeg Jets, who has a history of concussions, took a high hit in the team’s last game and appears will be out as well.

According to the Arizona Coyotes, Chychrun, 23, will miss the next 2-4 weeks with a lower-body injury. He was injured during the second period of Saturday’s 3-2 road loss to the Boston Bruins, following a collision along the boards. He came back on the ice for his shift but later left the game and did not return. The Rangers were once considered as a possible landing spot for his services.

Smith, 30, also was injured in Tuesday’s game and is not with the team as it gets set to face the Winnipeg Jets on the road Tuesday following Sunday’s 6-4 loss to the Columbus Blue Jackets. The specifics of his injury have not been disclosed.

Smith has 38 points and 16 goals in 56 games this season. The veteran of 11 seasons, who is in his fifth season with the Golden Knights, has 174 career goals and 417 points in 686 games. He is a pending UFA that Vegas may have considered flipping for future assets even with Mark Stone on LTIR. His trade status is now uncertain.

Copp, 27, is another pending UFA on an expiring deal with an AAV of $3.64 million. He was also having one of his best season before the injury registering 13 goals and 32 points in 54 games. Like the others, the Rangers were linked.

Whether Chris Drury was fully in on these players or not, it does take potential options off the board which could raise the prices on others.

One player the Rangers are definitely interested in is Anaheim Ducks pending UFA forward Rickard Rakell. He was held out of the Ducks last game with an upper-body issue, which could also be precautionary at this time of year. It is not unheard of for teams to hold out players they may be trading.

While there is plenty of speculation regarding what the Rangers will do with top prospect Nils Lundkivst, it was widely believed that he’s not being traded for a rental.

Vitali Kravtsov, who requested a trade before bolting to Russia has been available even before he made the demand. Unfortunately, if the Rangers wanted any real return for him, they needed to trade him at the last draft.

His stock has been in a spiraling downfall with the way he left the team, not once but twice. Remember, he used his European out clause back in 2019 after not making the roster out of camp. That move caused then Wolf Pack GM Chris Drury to call Kravtsov as a quitter only further diminishing his value.

Also, GM’s around the league are probably leary of making any deals for players in the KHL at the moment.

Another top trade chip was the Rangers 2022 first round pick. Of course, the more the team climbs up the standing the pick loses value. At this point the Rangers would be picking around 27. However, it’s now been reported that general managers are asking for team’s 2023 first round selections thanks to a general consensus that the 2022draft class is considered weak.

But this trade deadline may be a bit different from the rest in that, so far, teams have asked for and prefer 2023 draft picks as compensation over picks from the upcoming 2022 Draft. They are seen as more valuable – and that includes later-round picks, not just first-round picks. Unscientifically, the 2023 Draft is perceived as being “deeper” than 2022.

This is Chris Drury’s first trade deadline on his own. It’s one where his team is considered a buyer. He also needs to be careful as to what assets he moves and for whom. There’s a lot of scrutiny for the rookie GM, and many still haven’t let go on what he received in exchange for Pavel Buchnevich. 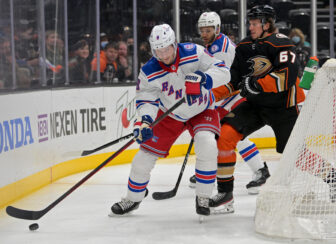 Claude Giroux’s days with the Flyers coming to a close. Plus Rangers and Caps interested in Tyler Motte, and where will Craig Anderson go? Read more.