Kaapo Kakko had a really difficult 2021-22 season simply trying to stay on the ice. He missed 39 games due to three separate injuries. However, he’s looked really healthy in these first few playoff games of his NHL career.

The 21 year-old, whom the New York Rangers selected second overall in the 2019 NHL Entry Draft has 1 goal in three games so far. He should have an assist after spectacular play late in Game 1, but his contact with goalie Casey DeSmith disallowed Filip Chytil’s game-winner with 3:10 left to play.

“It’s been amazing,” Kakko said on Sunday via the team’s YouTube channel. “First couple of games have been very good. A great feeling.”

As the New York Rangers and Pittsburgh Penguins get set to face-off in Game 4 of the series, the play of the Kid Line will continue to be important.

Kakko opened the Blueshirts scoring in Game 3 off a beautiful backhand feed from Alexis Lafrenière for his first NHL Playoff goal. All three members of the Kid Line, including Filip Chytil picked up their first career playoff points on the tally.

“I think they played good and created some scoring chances,” Gallant said on Friday. “I was talking to Laffy today, I said ‘You know, you guys played well, you guys played really good hockey’. For a kid line going up against the lines they are playing against, I’m real happy with them.”

Kakko knows that tonight’s Game 4 is a crucial, almost a must-win scenario, in order not to go down 3-1 in the series. But don’t expect his line to change anything.

“We just need to keep playing our game,” Kakko explained. “We spend some time in the o-zone. That’s our game. We need to shoot the puck a little more in these games.”

One thing is for sure, every Ranger knows that they will need a much better start than the 4-1 opening mess on Saturday night.

“We didn’t play good enough,” Kakko admitted. “We were sleeping in the [first] period.”

Kakko on the disallowed goal

The New York Rangers disallowed goal was a turning point in Game 1.

As the minutes were ticking away late in the third period of a tie game, Kaapo Kakko stripped Penguins’ defenseman Brian Dumoulin of the puck. The young Finn came flying in two-on-one with Alexis Lafrenière.

As he draws closer to Casey DeSmith’s glove side, Kakko turns his skates perpendicular to cut across the crease and try a stuff in to the opposite side. A beaten Dumoulin can be seen clearly on the replay putting his head in Kakko’s back and pushing him into the goalie.

As the trio collided, Kakko follows up with a pass back to Filip Chytil, who popped it into a gaping net for what should’ve been the game-winner.

Referee Chris Lee reviewed the play and determined Kakko interfered with DeSmith and disallowed the goal. The Penguins would go on to win 4-3 it off a deflection from by Evgeni Malkin in triple OT.

On Sunday, Kakko weighed in on the controversial call.

“I don’t know what to say about that,” Kakko said. “But I think in these games you need to go to the net. I don’t know if it was a good goal or not.”

When asked directly if he was pushed into DeSmith, Kakko was quick to share his real thoughts. 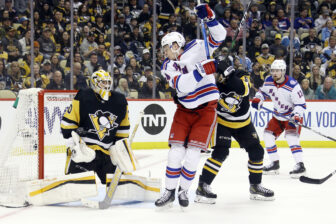 Also Read:
New York Rangers need to improve in 3 areas to even series against Penguins