Matthew Robertson is a 21 year-old left handed defenseman that the New York Rangers selected in the second round of the 2019 Draft. At 6-4 and 201 lbs, he already has the size to play in the NHL but has taken a little more time to develop than some of the other prospects on the blue-line.

Coming into this most recent Development Camp, he’s considered one of the top prospects with a chance to make the team.

Matthew Robertson has the tools

Robertson fashions himself a two-way defenseman with a focus on the defensive side. He prides himself on moving the puck and making that all important outlet pass. In his final WHL season, he won the Central Division’s Defenseman of the Year in 2020-21 with a +26. That was the best in the entire league.

This past season, he honed his game at the professional level playing 65 contests with the Hartford Wolf Pack and garnering 11 points. That experience, plus the guidance from the Rangers development staff has him focused on what he needs to do before training camp opens in September.

“On defensive side: positioning, angles, just little things to be more efficient in the d-zone,” Robertson noted. “On the offensive side: getting shots through, knowing when to jump up, and simplifying my game.”

The big defender has certainly matured with the full physical compliments to compete for the third left-defense pairing with Patrik Nemeth traded to Arizona.

Competition is going to be stiff with Zac Jones considered the likely favorite to earn that job after two stints with the big club in the past two seasons. In 22 career games, he has 6 points and all-important hockey IQ to play in the National.

“We’re all buddies,” Robertson said. “But at the end of the day we’re all competing for a job.”

One thing that can factor into the equation is the familiarity that Robertson has with Braden Schneider, who is expected to be the third pair right defenseman.

Before Schneider was called up to the Rangers in January, he and Robertson formed a top pairing with the Wolf Pack.

“I’m pretty close with [Schneider] so we talked throughout the year,” Robertson revealed. “He told me that the biggest difference was the flow of the game. Keep the pace of the game going and make the first play you see fast.”

Both players were considered the best defensemen in their respective WHL Divisions in 2020-21. Rangers management has viewed the two Western Canadian kids as a future defense pairing for quite some time and may finally get to see it happen this season.

The clock is ticking on Robertson though and he needs to start making his move before the Rangers change their plans. 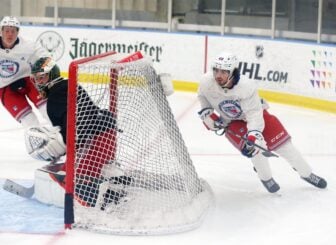