The New York Rangers are a team and they would not be where they are today without the contributions of every single player on the roster.

Of course, at postseason’s end the Conn Smythe Trophy is awarded to the MVP of the playoffs and each team probably has at least one or two candidates. In the case of the Blueshirts the argument can be made that three players are worthy of consideration.

Here are my three choices as the Rangers top candidates for the Conn Smythe. It should be understood that there’s still a lot of playoff hockey to be played so this could change.

Adam Fox: He’s the leader among all defensemen in playoff scoring with 20 points (5G – 15 A) in 15 games. With his two assists in Game 1 against the Lightning he extended his home point streak to 8 straight playoff games a new team record. He also holds the record for most points in elimination games by a defenseman in a single playoff season with 10 (5 GP, 2G – 8A).

Mika Zibanejad: The Blueshirts top center has been kept off the scoresheet only four times through 15 games in these playoffs. He currently leads the team in scoring with 21 points (8G – 13A) which is third in playoff scoring behind Edmonton’s Connor McDavid (29 points) and Leon Draisaitl (28 points). Mika does it all for the Rangers as the #1 center, top PK pivot, and the shot everyone looks for on the first PP unit.

Igor Shesterkin: He is a finalist to win the Vezina and Hart Trophy this season, but he had a rough start to this postseason. In Games 3 and 4 in Pittsburgh, Shesterkin was pulled in each contest allowing 10 goals on 45 shots. Of course, from that point on he’s been amazing posting a record of 8-3 with a GAA of 2.08 and a .940 SV% including 5 wins facing elimination.

Mika Zibanejad is currently the team MVP for the playoffs

The praise for Mika, who is a soft-spoken individual, has been heralded throughout the season and into the playoffs.

Newcomer Frank Vatrano was identified as perfect fit to play with Mika and Chris Kreider on the top line and can’t stop talking about how good his center has been.

“I’m fortunate enough to play with him. You can see how much of a competitor he is and how much he wants to help this team win every single night,” Vatrano explained. “It’s not just scoring goals. He’s so good defensively, he kills penalties. He plays so many big minutes for us. He’s so valuable to our team. For him to take it to a whole other level shows just how good a player he is.”

The 29 year-old has truly come into his own and has become a role model for one of the team’s most important young players.

“He’s a great leader,” Filip Chytil noted with admiration. “You can see it on the ice he’s pushing us to be better players.”

In the end, taking into account what he does game in and game out along with the comments from his teammates is why he’s my current MVP for the Rangers. 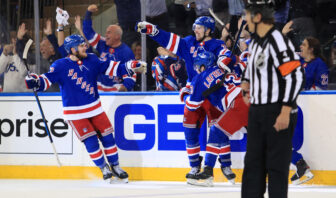 New York Rangers zap the Tampa Bay Lightning with a big 6-2 win. Recap all the action of the ECF’s Game 1. Read more.