Cuylle, 20, was selected in the second-round of 2020 draft. The pick was acquired from the L.A. Kings in exchange for Lias Andersson. He had a great season with 43 goals and 80 points in 50 games. In the playoffs, he has added 10 goals and 11 assists in 18 contests.

The Spitfires beat out the Flint Firebirds in 7 games. Brennan Othmann is their captain and also the top prospect in the Rangers system.

Praise for the Kid Line

The Rangers Kid Line was a huge factor in the last three games to help the team advance past Carolina and to grab a 1-0 series lead against Tampa.

Last night, Filip Chytil scored twice to give him five goals in his last three games. Alexis Lafrenière added two assist to give him 4 points in the same timeframe. Kaapo Kakko also picked up an assist and has two in his last two games.

“We know what our role is on that line. It just clicked and we started playing well,” Chytil said. “We’re young guys so we’re not thinking too much and having fun out there. We just want to help the team win games and go as far as we can.”

The Kids have played a big role in the postseason and earning praise from their coach and teammates.

“Fil’s a good kid,” Gerard Gallant said. “He worked hard, he competes hard and he deserves what he’s getting right now. He’s stepped his game up. He knows it, everybody knows it and that is exactly what we need from him.”

“They’ve greatly improved and contributed throughout the playoffs,” Artemi Panarin said. “They’re just a joy to watch to be honest. They’re a huge part of the team and I can’t wait for them to keep moving on.”

“That whole line has been playing well together and I’m really impressed,” Mika Zibanejad said. “We need everyone. They’ve been coming up big for us and it’s been fun to see.” 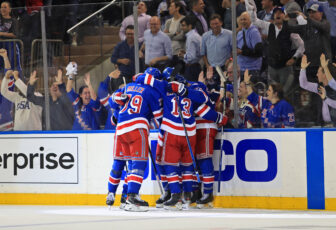