On this day, July 18 in 2016, the New York Rangers made one of their best trades in history by acquiring Mika Zibanejad.

Oddly enough, it wasn’t very well received by some at the time. Previous GM Jeff Gorton sent fan favorite Derick Brassard and a 7th round pick to the Ottawa Senators in exchange for Mika and a 2018 second round pick. That perceived disappointment didn’t last long as the trade is widely believed to be one of the biggest heists in the salary cap era.

Let’s look at some of the best trades in New York Rangers history.

It goes without say that the biggest trade of Jeff Gorton’s tenure as Rangers General Manager was acquiring Mika Zibanejad for a song in 2016.

When the Rangers acquired the former 1st round pick, 6th overall in the 2011 NHL Entry Draft from the Ottawa Senators, the hope was he’d realize his full potential. In exchange, Gorton sent to Ottawa the very popular Derick Brassard who scored quite a few goals during the Rangers deep playoff runs in both 2014 and 2015.

So how do fans feel about the trade now? Mika is not only a fan favorite, he’s considered one of the top centers in all of hockey.

Zibanejad, 29, scored 81 points in 81 games last season for the Rangers and then added another 24 points in 20 playoff games. For his career in New York spanning six seasons, he’s registered 363 points in 404 regular-season contests.

Mark Messier is without doubt considered the greatest New York Rangers player that was not drafted by the organization.

On October 4th, 1991 in what is one of the greatest trade in Rangers history, GM Neil Smith landed 5 time Cup winner Mark Messier and future considerations for Bernie Nicholls, Louie DeBrusk and Steven Rice. That consideration turned out to be Jeff Beukeboom who partnered with Brian Leetch to form NY’s top defensive pair for years. Upon his arrival, Messier was immediately named the Captain and Smith prophetically said, “The Rangers logo will look a little different after Mark is done here.”

He couldn’t have been more right.

This last deal takes us back to 1991, when GM Neil Smith signed a young Adam Graves to an RFA offer sheet. At the time, when you signed an RFA you could try and work out compensation with the other team. Smith and his counterpart in Edmonton, Glen Sather, were not able to agree on adequate compensation, so the issue had to be decided by an independent arbitrator.

Neil Smith was able to convince the mediator that the rugged enforcer, and fan-favorite, Troy Mallette, was a suitable return for Graves. Much to the chagrin of Sather, Mallette was heading to the Pacific Northwest and Graves was packing his bags for the Big Apple.

While this was not a traditional trade, it basically worked itself out to be. Adam Graves went on to become part of the core four that brought a Stanley Cup to NY after 54 years. He became a Blueshirts legend and has his #9 raised to the Garden Rafters.

Even more important is he is still making a difference. He’s an ambassador and continues to be a charitable force. Truly one of the greatest “trades” in the franchise’s history.

Graves played 10 seasons with the Blueshirts recording 280 goals and 507 points in 772 games.

Glen Sather did most of his player acquisitions via free agency. However, there is one deal where he traded away an underperforming big contract for a future Rangers captain.

On June 30, 2009 the Rangers dealt Scott Gomez, Tom Pyatt, and Mike Busto to Montreal for Ryan McDonagh, Chris Higgins, Doug Janik, and Pavel Valentenko. Needless to say, aside from Gomez and McDonagh the rest is just the answer to a trivia question.

McDonagh was a stalwart on defense and was one of the leaders on the blue-line that helped the team reach the 2014 Stanley Cup Final. Unfortunately, they fell to the L.A. Kings in five games but they likely don’t get that far without him.

Bottom line, Ryan became the Blueshirts best defenseman up until the day they traded him in 2018. The deal was one of the early rebuild moves that landed them Brett Howden, Libor Hajek, a first round pick that became Nils Lundkvist, and a second rounder which turned into Karl Henriksson. While the trade did not work in the Rangers favors, the Lightning eventually went on to win back-to-back Cups.

The Rangers acquired Adam Fox from the Carolina Hurricanes on April 30, 2019 for the price of two 2nd round picks (2019 and 2020). It was an absolute steal, but the Long Island native was basically set on only playing for the Rangers by refusing to sign an ELC with either the Calgary Flames or Hurricanes.

Fox had a good rookie season with 42 points in 70 games. It was his sophomore campaign that raised eyebrows with 47 points in a 56 game COVID shortened season. By capturing the Norris Trophy, he became only the second NHL defenseman since Bobby Orr to win it in their second year.

The 24 year-old followed that up with a 74 point season in 78 games in 2021-22. This is just the beginning of his young career and he’s already one of the great trades of all-time. He can only move up on this list. 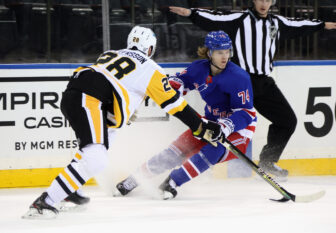