On Tuesday, the New York Rangers returned Adam Sykora back to HK Nitra of the Slovak Extraliga after playing in one exhibition game. He finished with 2 shots, and 4 penalty minutes in 12:39 of ice time as the Blueshirts beat the Islanders by a 4-1 score.

Sykora, 18, was taken in the second-round of the 2022 NHL Entry Draft. It was the Rangers first pick after losing a first-round selection as a condition of the Andrew Copp deadline trade with the Winnipeg Jets.

There really was no expectation for Sykora to make this team coming out of his draft year. The plan was always for him to return to HK Nitra where he recorded 10 goals and 17 points in 46 games last season.

Sykora is known for his relentless forecheck and ability to get under his opponent’s skin. He showed that in his one preseason game against the Isles on Monday. Despite not being very big at 5-10 and 172 lbs, Sykora didn’t look out of place in the game. He was strong on the puck and showed no fear of getting involved in the play.

“It will be special for me to be a part of this team,” Sykora said before the game. “I will prepare for this game mentally and physically because it will be hard.”

Per the Rangers press release here are the 61 remaining players in camp: 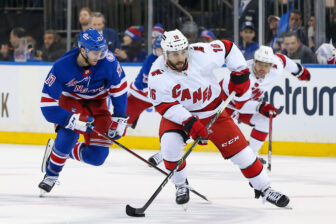