Out of the frying pan and into the fire for the New York Rangers as they continue their playoff-like weekend in Carolina. The Blueshirts will look to take down the Hurricanes after sweeping the season-series against the Tampa Bay Lightning in dramatic fashion.

The Rangers are among the teams pursuing the Hurricanes in the Metropolitan Division. Carolina has a division-leading 88 points, but four teams are at 80 or more points. That list includes the Rangers, who are in third place at 83.

“All you can control is your effort you put forward each night,” Rangers center Barclay Goodrow said. “If you start looking too far in advance, you start letting games slip away. I think we’ve been doing a pretty good job of that (necessary focus).”

New York won 2-1 on Saturday night at Tampa Bay on Mika Zibanejad’s power-play goal in the final minute. That was the Rangers’ third win in their past four games.

“That’s three in a row that we’ve played the way we want to play,” Gerard Gallant said. “I think we’re finding our game and everybody’s enjoying it. That was another battle tonight, a low-scoring playoff-type of game. The power play was a little off tonight until it gets the winning goal at the end. They came through when they had to.”

Gallant noted prior to the game against Tampa that goalie Alexandar Georgiev would be used Sunday. Shesterkin had 28 saves Saturday as he became the fastest Rangers’ goalie to 30 wins (41 games).

Even though the Rangers will play a top-tier team for the second night in a row, Gallant said it’s not necessarily a preview of playoff-level competition.

The Rangers have been solid in road games with a 19-12-2 record. 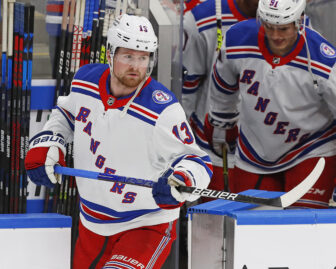 Another comeback win for the Rangers

It was another comeback back win for the Blueshirts, who beat the Lightning 2-1 after conceding the first goal. They are now tied with the Blue Jackets at 21.

Defenseman Jacob Trouba scored the tying goal in the second period. During the intermission, he spoke with ESPN about the playoff like feel the game had.

“It’s a tight checking, low scoring game,” Trouba said. “They’re a good team and we can play with them. Looking to finish off strong and get the win.”

Zibanejad, who blasted home his 25th goal of the season for a huge two points relayed that the these games are only helping them prepare for what’s next.

“The last two games was intense, like a playoff game,” Zibanejad said afterwards. “That was good for our group.”

The temperature seems to be rising as the final weeks of the regular season arrive for the Carolina Hurricanes.

They say they can take the heat.

“It was definitely a playoff-feel type of game,” defenseman Brett Pesce said of the most recent contest. “We fed off that energy for sure.”

The Hurricanes must beat the visiting New York Rangers on Sunday evening in Raleigh, N.C., to avoid their first four-game losing streak of the season.

The Hurricanes could receive a boost with the anticipated return of Tony DeAngelo, who has missed the past 11 games with an upper-body injury. With 40 points, he remains the team’s top-producing defenseman.

Carolina holds a 23-4-3 mark on home ice. The Hurricanes will try to match the franchise record for consecutive games with points at home. That standard is 15 set in 2005-06.