The New York Rangers trade buzz is about to become a roar with the NHL Trade Deadline two days away.

Tonight, the team faces off against the Lightning in Tampa before a quick turnaround to Carolina to take on the first place Hurricanes. Regardless of what happens in these next two games, the Rangers could have a different look come Monday when the deadline expires at 3 PM ET.

Forever Blueshirts learned on March 4 that the Rangers shifted their priorities to Anaheim Ducks forward Rickard Rakell after realizing the Vancouver Canucks were not serious about trading J.T. Miller.

Rakell, 28, has a cap hit is $3.789 million which the Rangers can take on in full not needing any salary retention.

Prior to this season, Rakell was averaging .73 points per game over the last three years and would bolster a lot of team’s top six. This year, the Swede who is friendly with Mika Zibanejad has 16 goals and 28 points in 51 games. He’s being held out of the Ducks lineup in anticipation of a trade.

The Rangers are also looking to bolster the defense and Seattle Kraken captain Mark Giordano may be the perfect upgrade over Patrik Nemeth.

Here’s the rub, Forever Blueshirts was told on March 16 that Giordano wants to play in his hometown of Toronto. He has a modified no-trade clause but reportedly told GM Ron Francis he would not get in the way of him making the best deal for Seattle.

In all likelihood he should land with the Maple Leafs, who have LTIR cap space to use with Jake Muzzin out with a concussion. Unless, Chris Drury gives up a first-round pick which seems unlikely.

Giordano, 38, has 23 points in 55 games and is also being held out of the lineup until a trade is made.

Fall back options for the Rangers at forward are believed to be Phil Kessel in Arizona and Andrew Copp in Winnipeg, although the latter has been battling injuries. Blue Jackets forward Max Domi also remains an interesting option.

On defense, should they fail to land Girodano there’s Calvin de Haan in Chicago and Colin Miller in Buffalo.

Here’s what others are saying:

Arthur Staple of The Athlethic (subscription required): The Rangers have prioritized Rakell and Giordano. Alexandar Georgiev was almost traded to the Arizona Coyotes for a low-level goalie prospect before Igor Shesterkin’s injury in January. Montreal’s Artturi Lehkonen is available but at a high cost.

Larry Brooks of the New York Post: States Rakell is the top target (if the price fits what Drury is willing to spend for a rental). He also believes that Giordano is the desired left defenseman the team wants. 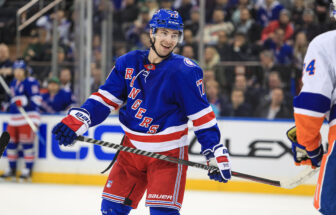 Shake up for Chicago Blackhawks

“Now all of a sudden you realize no one on our team is safe and we could all be going in different directions in the near future,” said stunned Blackhawks captain Jonathan Toews after Brandon Hagel’s trade. Read more about the situation in Chicago here.