The New York Rangers will look to keep the home cooking going as they host the Montreal Canadiens. If the Blueshirts can pull off a victory, it will extend their current winning streak at Madison Square Garden to four games.

A streak that includes victories against Columbus, Florida, and New Jersey thus far.

Coming off the heels of a thrilling 4-3 shootout victory against the Devils on Sunday night, the team must avoid a letdown against the depleted and struggling Habs.

Kaapo Kakko had a goal and an assist, and Adam Fox and Alexis Lafreniere also scored for the Rangers. Alexandar Georgiev made 24 saves. But it was Chris Kreider who got the winner in the seventh round of the shootout.

“To be honest with you, (Kreider) was hiding at the end of the bench,” Rangers coach Gerard Gallant joked.

The goal and the assist were Kakko’s first two points of the season.

“It feels good,” Kakko said via NHL.com. “A big win always feels good. I got huge chances last game, so I knew it’s going to come, and today was the day. The first goal is sometimes the hardest after 10 games.”

The Rangers defeated the Canadiens 3-1 in the last meeting between the teams, Oct. 16 in Montreal. Lafreniere scored the go-ahead goal midway through the third period.

Yesterday, the team announced that Greg McKegg was sent back to the Wolf Pack in the AHL.

That’s a great sign for Filip Chytil’s possible return after suffering an upper-body injury against the Calgary Flames on November 6th. The 22 year-old center was placed on IR and continues to skate on his own.

A definitive answer on his availability should come after today’s morning skate at 10:30 AM.

Regarding Sammy Blais, who was injured in the shootout win over the Devils, there has been no update. The outlook however does not look good.

“I don’t know what’s going to take place because it didn’t look good to me,” coach Gerard Gallant said about the injury after the game.

Blais had an MRI yesterday and more information should come when Gallant speaks with the media after the morning skate.

As for PK Subban, no hearing was scheduled by the Department of Player Safety.

Igor Shesterkin is the projected starter.

The Montreal Canadiens sure could use Carey Price right about now.

The veteran goaltender completed a 30-day stay in the NHL-NHLPA player assistance program last week and returned to the team, but remains out after offseason knee surgery.

Jake Allen has been a workhorse in Price’s stead, but left Saturday’s game in Detroit after a collision put him in the concussion protocol.

That left Sam Montembeault, claimed off waivers earlier this season, to face Boston on Sunday night. He made 36 saves, but the Bruins scored four unanswered goals in the third period for a 5-2 victory.

So who will start in net for the Canadiens, who have lost five of their past six games, when they wrap up a three-game trip Tuesday against the New York Rangers at Madison Square Garden?

“We know Jake’s experience versus Samuel, who has less experience, for sure,” Canadiens coach Dominique Ducharme said. “We’re in a situation where every game, we need a win. So we’ll manage that day to day.”

If Allen’s not back, it could also be Cayden Primeau, called up from the Laval Rocket of the American Hockey League on Sunday. 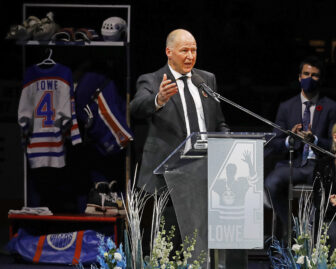