The New York Rangers defense is still coming into its own, which is why I believe it may be the strongest position on the club for years to come.

In part 4 of our look at the Rangers lineup for the 2022-23 season, we see a young group of defensemen that have yet to reach their full potential. Only one real question remains and that’s what Gerard Gallant will opt to do with the 6th and 7th spots?

There are 6 defensemen in your lineup on most nights. Sure, a head coach may opt to go with 11 forwards and 7 defensemen on some occasions, but 99% of the time it will be the standard setup of 12F and 6D.

Good news, the New York Rangers defense has 5 blue-liners basically locked in for 2022-23.

The leader of the group is their elder statesman. On August 9th, Trouba was named the 28th captain in team history.

“Since he joined the Rangers, Jacob has consistently displayed all of the qualities we want in a leader on and off the ice,” said GM Chris Drury. “As we look to take the next step as an organization, he is a role model for all of our players to follow and the perfect choice to be our captain.”

The Rangers entire team feeds off his hard-hitting and fierce play, which gives them their identity of being difficult to play against.

The native of Jericho, NY is the defensemen that sets the offensive tone of the New York Rangers. His play on the ice in all three zones, no matter the situation, has many believing Fox has ice in his veins.

Fox, 24, recorded 74 points in 78 games last season for the Blueshirts. In his first full playoffs, he added 23 points in 20 contests to lead all Rangers d-men in scoring. Only Cale Makar of the Colorado Avalanche had more playoff points (29) last postseason.

The smooth skating defender is entering his fourth season and will be a contender for the Norris Trophy, which he won in his sophomore year in 2020-21.

When it comes to warriors, Ryan Lindgren has been just that since the day he stepped onto the ice wearing the Rangers Blue. Acquired as a side note in the Rick Nash deal from the Boston Bruins, he’s become the rock-steady partner Fox needs. The Jeff Beukeboom to Brian Leetch if you will.

Lindgren, 24, notched 15 points in 78 games last season while averaging 20:06 TOI. In the playoffs, he suited up for 17 of the team’s 20 contests all by sheer will. The defenseman was injured at the end of the regular-season and gutted it out as best he could.

Who knows, if Lindgren was close to 100% maybe the Rangers get by Tampa? Regardless, there’s no doubt of how important he is to the success of this team.

The NHL needs to lookout for K’Andre Miller this season. Since he debuted as a 21 year-old in the 2020-21 campaign, it’s been nothing by steady improvement to what was an already impressive game.

Miller, 22, registered 7 goals and 20 points last year. In his first taste of playoff action, he scored twice and added 7 points in 20 contests. More importantly, he did not look overwhelmed and made some incredible defensive plays in his own zone.

The Rangers drafted K’Andre in the first round, 22nd overall, of the 2018 Draft and were brilliant for doing so. As he gains more confidence and starts to jump in the play more often, he will soon start having his name come up in Norris Trophy consideration.

The Rangers called up Braden Schneider in January wanting a to get a brief look at their 2020 first round pick. Instead, they received a so much more.

Known for being a physical defenseman that can make a good breakout pass, he scored a goal in his first game. Playing like a seasoned veteran made it very difficult to take him out of the lineup from that point on and that’s not going to change this year.

Schneider, 20, picked up 11 points in 43 games in his rookie campaign. Despite a few scratches during the regular season, when the playoffs rolled around he played in all 20 contests and registered 3 assists.

The biggest question facing the Rangers in camp is who will be his partner.

This upcoming training camp is going to be a good one with four capable young blue-liners fighting for the last two spots on defense. It will get even more complex if the Rangers sign a veteran to a PTO in the next few weeks.

In his first full season as a pro with the Hartford Wolf Pack, he was their leading scoring defenseman with 35 points in 52 games. This past season, he played in 12 games with the big club and tallied two assists.

At this moment, many feel that he has the edge to win the job in September.

The 22 year-old defenseman struggled to adjust coming over from Sweden. Lundkvist went on to play 25 games with the Rangers last season, recording 1 goal and 3 assists before being sent down to the Hartford Wolf Pack.

Things didn’t get much better for him in the AHL, as he went on to score 15 points in 34 games but had long stretches of ineffective play. Despite being on the small side at 5-11 and 187 lbs, Lundkvist is excellent at making a good first pass and has an elite level shot.

The biggest issue for him making the team this season is he’ll have to do it by switching to the left side. If he can’t make the adjustment, there’s no way the Rangers will let him sit as the the 7th defenseman.

Robertson is a 21 year-old left handed defenseman that the New York Rangers selected in the second round of the 2019 Draft. At 6-4 and 201 lbs, he already has the size to play in the NHL but has taken a little more time to develop than some of the other prospects on the blue-line.

This past season, he honed his game at the professional level playing 65 contests with the Hartford Wolf Pack and garnering 11 points. Similar to Lundkvist, if he doesn’t make the team the Rangers will continue his development in Hartford.

One thing in Hajek’s favor is he has the most NHL experience with 94 games.

In the end, this is how I see it shaking out: 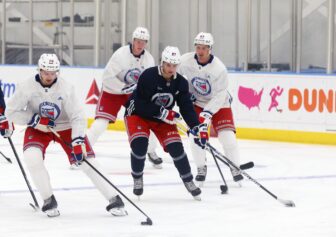