Here we are. One game left to clean up some bad habits that have presented themselves in the New York Rangers game this preseason. Mostly revolving around turnovers.

The team is 2-2-1 in their five previous exhibition games and will look to finish above .500 against the New York Islanders at UBS Arena.

Game and broadcast info in bold and italics below:

The Rangers will face the Islanders and if the last two days of practice are any indication of the final lineup, the forward lines will look something like this:

So will this be the opening night lineup? If so, that means Jimmy Vesey will be given a standard contract soon and Dryden Hunt along with Julien Gauthier will be placed on waivers.

Vitali Kravtsov right now is on the outside looking in, but Gerard Gallant noted the lineup wasn’t finalized. One thing the coach indicated is that if he plays, it may be on a line other than with Artemi Panarin and Vincent Trocheck.

“It’ll be a mix and there’s different options,” Gerard Gallant said. “Obviously, Lindgren isn’t playing tomorrow. He skated and he’ll be ready to go (for the season).”

Ryan Lindgren, who seems to be forever nursing a minor injury due to the way he plays, is being held out. He’s listed as day-to-day by the team.

On defense, Jacob Trouba was back yesterday after being given a maintenance day on Thursday.

If the Rangers opt to hold him out also, they could pair K’Andre Miller with Adam Fox. That will give Libor Hajek and Matt Bartkowski another game to battle for the 7th defense spot. Zac Jones has already unofficially won the job on the third pair with Braden Schneider.

Igor Shesterkin, who missed his scheduled start versus Boston, will likely get the nod in goal.

The Rangers fifth line, or better known as the extras at practice Friday were Hunt, Gauthier, and Kravtsov.

At this point, it looks like Kravtsov will make the team out of camp as the extra forward and be given more time to work on his game in practice.

“I think he’s ready to work right now, two years ago, not really, he was still playing kids hockey,” Panarin told The Post after practice on Friday. “Right now, he understands everything. Sometimes, for me, it’s hard — like when you lose your confidence. Look at last playoffs, the last few games, the last few games I lost confidence. But for a young guy, it’s tough. He’s a strong man. Mentally, he is strong.”

Unfortunately, his decision to not play pro last season with the Hartford Wolf Pack cost him valuable development and adjustment time in North America. This summer, he signed a one-year, one-way deal with the Rangers but is no longer waivers exempt. If he were, he’d likely be starting the year in the AHL.

“He’s come to camp from day one and worked hard,” Gallant said of Kravtsov. “His last game wasn’t great, but not many guys played well. He’s still got to battle and make the team.” 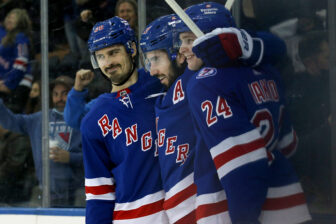