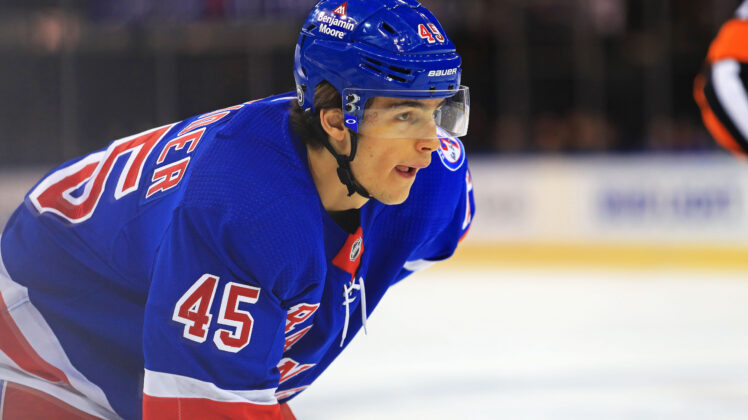 The New York Rangers, aside from Chris Kreider, will be on a long break. The All-Star Weekend will be on February 4-5 in Las Vegas with the NHL’s leading goal scorer in attendance.

While many teams had large swaths of games postponed in December, the Rangers will only be making up three games during the originally planned Olympic break (2/7 – 2/22). New York returns to practice on February 11 in preparation to host the Boston Bruins on the 15th.

Gerard Gallant has bounced around certain players all over the lineup due to injury or COVID related issues this season. Coming out of the break, he is expected to have three injured players back in Adam Fox, Kaapo Kakko, and Filip Chytil.

Patrik Nemeth, who has missed time due to personal reasons is still unknown.

“We have 14 days to get things back on track,” Gallant said on Monday. “Put your lines together, D-pairing together, assess what the first half of season was like and what we have to get better at… This break is going to do us real good.”

One thing that may stick coming out of the break is Alexis Lafrenière on the top line with Mika Zibanejad and Chris Kreider. Kakko should also return to the second line.

“He’s got more confidence,” Gallant said of Lafrenière. “He’s playing good defensive hockey — confident in the offensive zone with the puck. He’s just got to be stronger with the puck in the neutral zone… I’m happy with the way he’s going.”

The 20 year-old has played well of late and seems to be getting comfortable in his role on the first line. He now has goals in two consecutive games and his line mates are seeing the difference.

“I see him learning and coming to understand the kind of player he needs to be in order to be effective at the NHL level,” said Kreider. “He’s got unbelievable vision, great hands, hockey IQ, I don’t think he’s confident enough in his shot — he’s got a great shot. He’s a very strong skater in terms of his edges and I think he’s only going to get faster.”

The NHL temporarily implemented taxi squads to deal with COVID-19 issues coming out of the holiday break in December. That comes to an end this weekend and the Rangers have already made some moves.

On Wednesday, they assigned forwards Jonny Brodzinski and Morgan Barron, defenseman Nils Lundkvist, and goaltender Adam Húska to the Hartford Wolf Pack. That should give everyone a clear indication of where Nils currently stands on the depth chart.

Two defenseman that remain are lefty Zac Jones and righty Brendan Schneider. Jarred Tinordi has already been assigned to Wolf Pack which means, if and when Nemeth returns, either Zac Jones or Libor Hajek will be sent to Hartford.

My money is on Jones, although it should be Hajek.

Meanwhile, it looks like 20 year-old rookie Schneider is here to stay.

“I like him a lot,” Gallant beamed when asked about the kid’s play. “Character guy. Tough, hard, confident with the puck. I knew he was going to be a good player, and he hasn’t played many pro games but he’s done a real good job.”

Schneider has three points in 10 games and averaging a healthy 16:49 of ice time. He has also played over 20 minutes per game since Adam Fox went down with injury and presented himself extremely well.