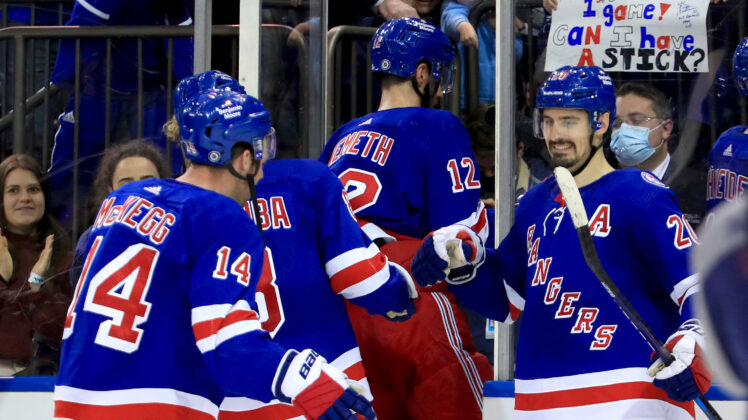 After arriving home from Friday’s 6-3 loss in Carolina at about 3:30 a.m. Saturday, the Rangers were outshot 16-4 in the first period and faced a 3-1 gap seven minutes into the second period before storming back with four goals in the final 8 1/2 minutes of the period as coach Gerard Gallant put Kreider, Mika Zibanejad and Artemi Panarin together on the top line.

Chris Kreider scored twice during a four-goal second period and recorded his fifth career hat trick midway through the third as the New York Rangers recovered from a sluggish start and rallied for a 7-3 victory over the visiting Arizona Coyotes on Saturday night.

“I am really proud of this group and the way we came together,” Kreider said. “It is such a good group in the room. These guys really want to win hockey games.”

The Rangers pulled off their second straight comeback on home ice after rallying for a 6-3 victory over the Toronto Maple Leafs Wednesday.

Kreider scored for the fifth straight game and increased his season total to 29 goals to tie Alex Ovechkin for the league lead. Kreider scored his second career shorthanded goal to start the comeback, and got his fifth hat trick of the season backhanding a rebound into the net.

Julian Gauthier netted the tying goal, and Panarin scored the tiebreaking goal on a power play as the Rangers won for the fifth time in their last seven games.

“Wild 48 hours for us,” Trouba said. “It took a little bit to get our legs and our momentum going, but we had good composure in between periods. We didn’t like our game. We stuck with it. We know we have a team that is capable of turning it on. You don’t want to rely on turning it on and off, but a unique 48 hours for us and it’s good to be able to do that.”

Kreider having a career year

The Rangers had seven shots on goal until their barrage, which started when Kreider got a cross-ice pass from Zibanejad and lifted a shot over Vejmelka.

Gauthier jammed in his own rebound with 4:34 left, and a little over a minute later, Panarin blasted a wrister from the left circle into the net.

Kreider made it 5-3 with 1:18 remaining when he lifted a shot from the doorstep into the net after Zibanejad’s cross-ice pass banked off an Arizona defender.

“He’s just playing with a lot of confidence,” Gerard Gallant said. “Him and his linemates are playing real well together and the power play has been really good this year, clicking. He knows where to score goals. He’s around that net. He shoots the puck real well and skates well. He just keeps his game simple.”

When Kreider added his third goal of the evening for the hat-trick, it marked a career high of 29 goals. He is currently tied with Alex Ovechkin for the NHL goal-scoring lead in the race for the Maurice Richard Trophy.

The 30 year-old was humble in his post-game press conference and focused on team goals, not his own individual success.

“We know we’re not out of it,” Kreider said about being down in the game. “At the same time, we know we need to play the right way to generate those chances. The challenge for us is just doing that from the drop of the puck, not digging ourselves a hole regardless of whether we have legs early on.” 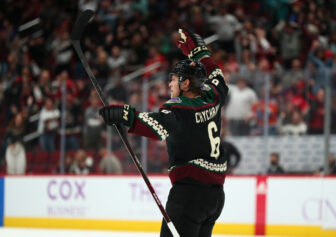