The New York Rangers were called out by their head coach for a “garbage” performance against the Washington Capitals on Tuesday night.

Coming out of the Holiday Break, Gerard Gallant had hoped for a lot more effort from his team then a 4-0 no show. At practice on Wednesday, he skated them hard and even had them doing sprints without the puck.

“We tried to get rid of that turkey dinner for all of us,” Gallant quipped. “We didn’t get rid of enough (versus the Capitals). I was real happy with everything in practice today. We have to move past it. We were awful and we addressed that. Hopefully we play better in Tampa. We better (play better).”

This will be the second meeting of the year since they played each other in the season-opener. The Rangers were able to dominate the Tampa Bay Lightning in a solid 3-1 victory, which Gallant labeled “one of our best games.”

The Rangers hope to get a jolt versus the Bolts in order to shake off the stinker they posted at the Garden.

The New York Rangers are now 1-2-0 after their 7-game winning streak was snapped by the Pittsburgh Penguins. They needed to rally in the third period to beat the New York Islanders just before the break and have shown signs of slipping.

However, to a man the Blueshirts still have a lot of confidence in themselves as explained by captain Jacob Trouba.

“You’re going to have games like that throughout the year,” Trouba said. “It just happened to be after a break so I don’t think that had much to do with it. We’ve played pretty good hockey over the last 10, 11 games as a whole. We just have to get back to it and make sure it was a one off.”

At practice yesterday, Gallant once again shuffled his lines and it’s expected at least one forward will be scratched in favor of Sammy Blais. That forward will either be Jimmy Vesey or Alexis Lafreniere, who found himself on the fourth line.

“I want him to be better obviously. Laffy’s gotten some chances to play with good people and he’s played well at times, but it’s inconsistency,” Gallant said. “There was a bunch of them (that deserved to be demoted), so Laffy is getting maybe knocked down today in practice. Not saying he’s going to be there tomorrow. I don’t know where he’s going to be tomorrow but sometimes it’s a wake up call for the kids… You have to be consistent but he’s not alone.”

Igor Shesterkin is likely to get the nod in goal tonight, although Jaroslav Halak is likely to start one of these two road games. Halak last played in a win over the Philadelphia Flyers on December 17, so Sunday versus the Florida Panthers seems likely.

The Lightning knocked off the Canadiens last night and will be playing the second half of a back-to-back.

If the Rangers think they can simply take advantage of a tired team, they would be wrong. Tampa Bay is once again one of the top squads in the NHL with a solid home ice record of 13-4-1.

Andrei Vasilevskiy played on Wednesday night, which means the Rangers could see Brian Elliott in between the pipes. Tampa’s backup is 7-2-0 despite a GAA of 3.31 and a below average .894 save percentage.

That being the case, his record has a lot to do with the stacked and physical lineup of the Bolts which boasts Nikita Kucherov and his 50 points. There is also Steven Stamkos (38 points) and Victor Hedman (20 points) to deal with.

Bottom line, the Lightning will give the Rangers everything they can handle so a full 60-minute effort will be a must. 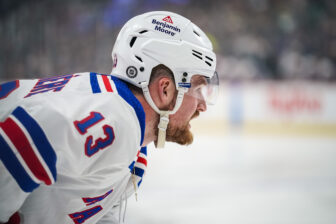