New York Rangers look to get even with Hurricanes 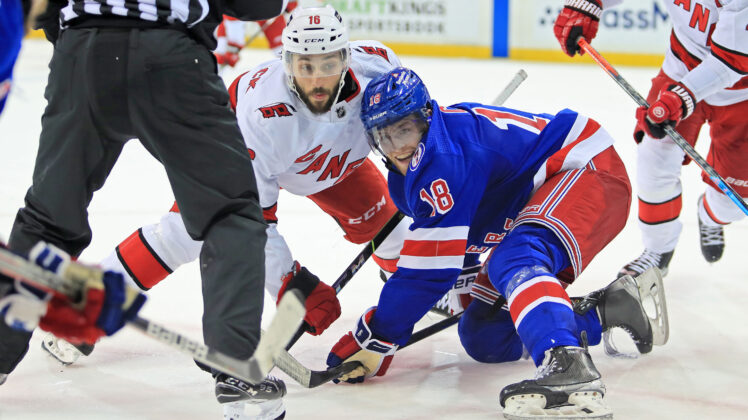 Tonight is all about getting even for the New York Rangers when they host the Carolina Hurricanes at Madison Square Garden for Game 4.

As the Blueshirts look to even the series at two games each before heading back to Raleigh, they will also be primed and ready to send some Hurricanes a message if need be.

“I wasn’t happy with the bullshit at the end of the game [3] they initiated,” Gerard Gallant explained about the Max Domi cheap shot on Ryan Lindgren. “They’re not sending any message. We got the guy that can handle all their guys if we want to.”

The guy that can handle the Canes is 35 year-old enforcer Ryan Reaves.

“You never want to see a guy (Tony DeAngelo) chirping your bench. I wish I would’ve seen that but I was on the ice for the Domi-Lindgren thing,” Reaves said. “I’m sure guys aren’t going to shy away from finishing checks on those guys. But there is going to be a little added nastiness when a specific player does something.”

Igor Shesterkin was brilliant once again in this series stopping 43 of 44 shots on Sunday. The only one to elude him was a Nino Niederreiter backhand that actually sent the Garden Faithful to chants of I-gor, I-gor in a show of support.

“I’d like to thank the fans for the energy they provided,” he said. “They supported me even though I kind of let them down in that one spot.”

After opening the playoffs strong in the first two games against the Penguins, Shesterkin struggled badly in Pittsburgh allowing 10 goals. He righted himself just in time to win Games 5, 6, and 7.

In this series against the Hurricanes, he looks every bit the Vezina and Hart Trophy Finalist with a GAA of 1.33 and a .956 SV%.

“I liked the way we battled– Our goalie was outstanding in the first half of the game and made some big key saves for us,” Gallant acknowledged.

New York Rangers know it will be a tough one

The Rangers and Hurricanes may have opened things up just a tad in Game 3 but don’t expect a goal bonanza anytime soon.

“All three games have been really, really close games,” Chris Kreider said. “Could’ve gone either way and you know, that’s playoff hockey. You just got to continue to work for your bounces.”

One area that the Rangers have excelled at is special teams. They did score a big power play goal off the stick of Mika Zibanejad, but it’s their PK that’s been outstanding.

In this series, the Canes are 0-8 and just 5 for 43 overall in the postseason.

“Killed some penalties, scored a power play goals and that’s how you win hockey games,” Gallant said. “It was a tight battle again– Igor was outstanding and that was the key.” 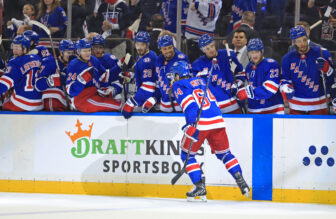 The New York Rangers and the NHL announced details for Game 5 in Carolina.

Via the team’s press release:

The National Hockey League announced this morning that Game 5 of the New York Rangers’ Second Round Stanley Cup Playoff series against the Carolina Hurricanes will start at 7:00 PM ET at PNC Arena (Raleigh, N.C.) on Thursday, May 26. Game 5 will air on ESPN and can be heard on ESPN 98.7 FM. In addition, MSG Networks will provide pregame and postgame coverage.

The Tampa Bay Lightning are moving on to Round Three after sweeping the Florida Panthers. Plus a Nazem Kadri hat trick in the face of threats lifts the Colorado Avalanche to a 3-1 series lead. Read more.