The New York Rangers have only played three games in the month of February. That’s due to the All-Star Break and Olympic Break the NHL used to rescheduled postponed games.

Starting now until the end of the season, we will run a new series based on player performance to see who’s hot and who’s not. Every two weeks you’ll get an update about who’s going, who isn’t, and who to keep an eye on.

Was there any doubt who would top the hot list? Shesterkin has been stellar in the first half of February picking up at least a point in all three contests he’s played. Considering how slow the Rangers have started games, his goaltending has been the key reason they’ve picked up 5 out of a possible 6 points.

Offensively, it’s the usual suspects leading the charge. Panarin is getting his points, but all four so far have come solely on the PP. He needs to pick up his 5v5 play if he really wants to make a dent in the scoring race.

Meanwhile, Kreider and Zibanejad just keep putting pucks in the net. However, like everyone else on the Rangers, they don’t score much 5v5. Each has one point at even strength so far this month.

Miller gets the nod here thanks to his stellar defense and chipping in with two huge goals. Against the Red Wings, he scored a gorgeous wraparound goal to help the Rangers get a point. And in the previous game, his 9th round shootout goal beat the Bruins.

Strome leads us off in the Who’s Not category, especially after the big miss in the shootout that would’ve secured Shesterkin’s 50th career win. While the puck seemed bounce off his stick, he really needed to bury it. As the second line center he should be scoring more. His lone assist came on the PP.

As for Gauthier, he’s playing on the third line and needs to find his game again. The kid is blessed with speed but needs to turn that into legit high danger chances by driving to the net consistently.

Meanwhile, Rooney is ice cold having not scored a goal in 22 games. He isn’t counted on to do so, but the Rangers desperately need any help offensive help they can get. A goal from the 4th line at even strength would feel like a bonanza for the top two lines. He also needs to better at draws.

Alexis Lafrenière is my player to watch. Last night against Detroit, the kid was going with 4 SOG and several excellent attempts. If he keeps firing the way he did on Thomas Greiss, hitting the post and also a downed Adam Fox in the back will turn into goals. He does have a tally this month, which came in the big win against the Panthers on February 1. 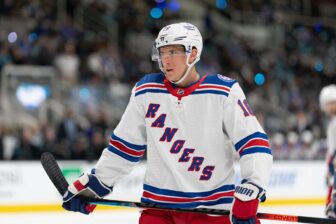 Also Read:
Rangers negotiations with Ryan Strome have similar feel to that of Mika Zibanejad’s

Are the Canucks pulling J.T. Miller off the table? Plus what will the Habs do with Petry. Read more here.