New York Rangers mixing up the lines for a spark, Vitali Kravtsov likely vs Isles

The overall mood at New York Rangers practice was a little more businesslike than it has been after a 3-2 overtime loss to the Red Wings on Sunday.

In that game, head coach Gerard Gallant mixed up his lines to shake the cobwebs out of his player’s heads. The biggest move was sending Chris Kreider all the way to the fourth line.

Afterwards, Gallant stated that last season’s leading goal scorer with 52 deserved to be where he was at. Today, he wanted to stress that it wasn’t about Kreider alone.

“I want everyone to be better, not just Chris Kreider,” Gallant said via the team’s YouTube channel. “Our leaders and top players they’ve got to lead our team when we’re not playing well. That’s not giving the young guys or the bottom lines an excuse. We’re talking about the group, Chris went to the fourth line and other guys went to different spots. It wasn’t about Chris it was about the team.”

Kreider, 31, has 10 points in 13 games this season. However, his 4 goals only have him on pace for 25. After practice, the veteran spoke about doing more with his own game.

“Thing aren’t going particularly the way we want them to,” Kreider explained. “I’m getting the same looks but they’re not going in. They will and I’ll score a lot but for me it’s the details. It’s establishing the forecheck and getting my nose over pucks. Those are the thing I need to do consistently.”

In an effort to get Kreider and others going, Gallant has shifted players around for a new look that we could see tomorrow.

According to multiple reports, the Rangers practice lines were arranged like this:

Julien Gauthier is out with an upper-body injury and is considered day-to-day. Ryan Carpenter looks like he could be a potential scratch to allow Ryan Reaves to step back in the lineup.

Vitali Kravtsov is considered possible to play tomorrow for the first time since October 29, where he was suffered an upper-body injury going hard into the boards.

“I feel great,” Kravtsov said. “I’m going to build the confidence. Play well, help the team, help myself. Play hard and fast. I’m feeling much better right now than a week or a month ago.”

Kravtsov, 22, has no points on the season in 4 contests.

On defense, Ryan Lindgren remains day-to-day with an upper-body injury and Gallant said he was doubtful to play versus the Islanders.

Zac Jones, who was benched for all of one shift of the third period shouldl stay with Jacob Trouba as the second pair defense. Adam Fox did not practice on Monday, and was given the day off for maintenance. 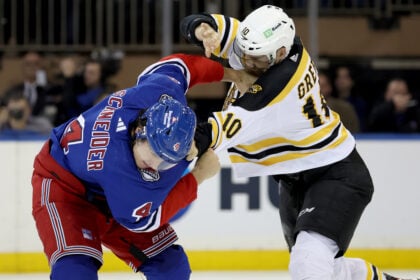