The New York Rangers are riding a three-week surge, winning eight of their past 10 games and feeling good despite a 1-0 home setback to the Nashville Predators on Sunday.

New York averaged 3.3 goals a game in the 10-game stretch, even with the shutout loss. But three goals do not figure to be enough when the Rangers face the Colorado Avalanche on Tuesday night in Denver.

The Blueshirts could face consecutive regulation losses for the first time all season if they come out of the gate slow again in Colorado.

Against the Predators on Sunday, they were outhit and outshot by a wide margin in the first period. “It looked like we weren’t ready to play,” head coach Gerard Gallant said after the loss.

After witnessing too many lost one-on-one battles, Gallant unloaded a bit on his team.

“I didn’t like any of the game to be honest. We played too soft,” he said. “We didn’t play a hard enough game. It was a man’s game, and we didn’t play it.”

One of the team’s leaders, Chris Kreider agreed with his coach and provided his thoughts in a postgame interview.

“There are going to be those stretches, but we’ve got to continue to stick to the process, stick to the things that we’ve done that have given us success,” Kreider, who leads the team with 17 goals said. “Over the last few games, there have been moments we’ve gotten away from that entirely.”

The Rangers could use a big win against one of early odds favorites to win the Stanley Cup. According to Hockey-Reference, New York has had the second easiest schedule out of 32 teams. The Hurricanes have had the easiest.

This one could get rough

Tempers flared in Colorado’s 7-3 win at MSG last week after the Rangers’ Jacob Trouba delivered a hard hit to Nathan MacKinnon, who went to the locker room but returned later.

Landeskog dropped the gloves with Trouba.

It isn’t the only time this season Trouba has delivered a hard check. His hit on Chicago’s Jujhar Khaira the night before the Avalanche game sent the Blackhawks forward to the hospital and into concussion protocol.

Trouba also had an open-ice hit on Nashville’s Luke Kunin on Sunday night.

“You take a hit when it comes. It’s just part of the game,” Trouba said. “I wouldn’t say I’m thinking about hitting people before the game starts. It just presented itself three games out of the last four. When the physicality is there, it’s there.”

Landeskog won’t be available for a rematch, but the Avalanche have shown they can be physical, too. After Jacob MacDonald was knocked out of Sunday’s game with a hard hit, the team delivered some hard checks on the Panthers.

“We ramped up our game, we were playing more physical,” Burakovsky said. “You see guys who usually don’t make hits hit a few big ones. Everyone’s sticking up for each other.”

Note: Tonight’s game is on ESPN+ – click article below for details

Also Read:
How to watch Tuesday’s New York Rangers game against the Avalanche

Colorado back on track

Colorado has been streaking too, going 12-2-1 since Nov. 11 and piling up the wins thanks to a sizzling offense. The Avalanche are averaging 5.3 goals a game during the streak, in which they scored at least seven goals in a game six times. Only once in the last 15 games have they been held under three goals.

Colorado can win low-scoring games, too. The Avalanche beat the Florida Panthers 3-2 on Sunday night despite not having two of their top forwards, Gabriel Landeskog (lower body) and Nazem Kadri (lower body).

Landeskog is expected to miss a couple of weeks, but Kadri, who leads the team with 34 points (11 goals), could be back Tuesday after missing the previous two games.

Andre Burakovsky picked up the slack against the Panthers, scoring all three goals for his first career hat trick. Burakovsky is tied with Mikko Rantanen and Cale Makar for the team lead in goals with 12.

He scored the go-ahead goal at 11:43 of the third period, his second goal in the final 20 minutes, and the Avalanche held on for the win.

“It’s important because the message we’ll send to the coaching staff will be that it was a great checking game and we’ve got to be able to win games 1-0, 2-1, 3-2,” Avalanche coach Jared Bednar said. “We’re not going to put up seven every night.” 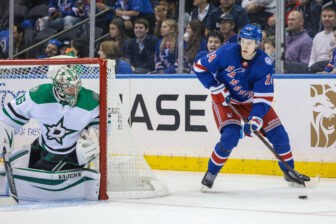 Also Read:
Rangers should look at Anton Khudobin trade if he clears waivers

The Flames are shutdown, and more players are getting added to protocol. Read more.