New York Rangers need to move on from Vitali Kravtsov

New York Rangers right-wing Vitali Kravtsov has reportedly fled to Russia after refusing assignment to the AHL last week. The organization needs to rid itself of this player as this unfolding drama has begun to be a distraction.

Signing a contract to play in the NHL is a huge honor. It comes with more responsibilities and obligations than most people realize. For Kravtsov, the arrangement that came with his contract seems to be one-sided. He has once again decided to not fulfill his part of the deal.

When the Rangers announced their opening night roster, Kravtsov was not included and was subsequently sent down to the AHL to play for the Hartford Wolf Pack. This was the second time he did not make the team out of training camp. It was also the second time he was disgruntled about the team’s decision and decided to walk away.

The Vladivostok, Russia native was the Rangers first-round draft pick (9th overall) in the 2018 NHL Draft. His career has not gone as he envisioned, but the same can be said by the Blueshirts. He was expected to be a top-six forward by now, instead, he has had conditioning issues and a what appears to be an attitude problem.

Vitali Kravtsov wants out of the Rangers organization

Let’s be clear about a few things. Regardless if you are a first-round pick or a 7th round pick, a player has to earn his spot on the 23 man roster. Nothing is given to you in today’s NHL.

When Kravtsov failed to make the team in 2019, he reported to the AHL. He was clearly unhappy and those who saw him in Hartford could tell. Soon after, he decided to use his European Out Clause to return to the KHL. Things didn’t go to well for him there either and former GM Jeff Gorton made sure to get him back to the States. According to Pack coach Kris Knoblauch, he was a good citizen the second time around.

Last season, due to the pandemic it was agreed to let Kravtsov play the entire KHL season. He then came to the States where he managed to play 20 games with the Rangers and register four points ( 2 goals, 2 assists). Not necessarily the scoring touch associated with a first-round pick. That’s ok because players develop, they learn, they adapt. So why does Kravtsov think he should get preferential treatment?

Fast Forward to the last five days. The 21-year-old did not report to Hartford and requested a trade because he is unhappy with Rangers’ management. The team granted him and his agent the opportunity to look for other teams to talk to, but he remains the property of the Rangers at this time.

On Sunday, reports surfaced that Kravtsov has returned to Russia and is waiting for a trade to happen.

In the meantime, the Rangers are in the midst of a sickness/injury problem with Ryan Strome in Covid protocol and Kappo Kakko placed on injured reserve with an upper-body injury. Kravtsov would have certainly been considered to have been recalled back to New York had he reported to the AHL.

Instead, he gave up on his team and left North America. This can only be defined as immature and stubborn.

Kravtsov opted to not honor his obligations

Now before everyone starts saying ‘he shouldn’t have been sent down’, or the ever-popular ‘why was he sent down and Libor Hajek still here’, let’s remember one very important factor:

The reality is clear, Kravtsov decided to not honor his contract and had abandoned the team sitting in Russia watching KHL hockey. For many players struggling in the minors trying to make it to the show it’s like a slap in the face. He should’ve been in Hartford getting into game shape and have been available for a call up to play against the Toronto Maple Leafs. It would’ve been a great opportunity for him to tell management, ‘you were wrong to send me down in the first place’. Instead, he ran back to Russia.

At this point, the Rangers should not be looking to be bring him back. They should be looking to trade him for whatever value they can get for him. Is there a good value for a player who has quit and has been suspended by his current team? What would another team want to trade to bring this drama to their organization, despite all the tremendous potential. 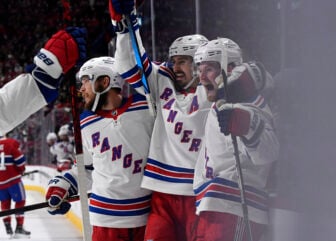 Rangers should trade Kravtsov sooner rather than later

There’s no place for a player who doesn’t want to earn his way onto a team. Kravtsov has talent but his perceived attitude issues are concerning. Unfortunately, in his early career, he’s shown more ways of what not to do to be an NHL player.

Two different regimes have seen problems with his game. Jeff Gorton, David Quinn, and Davidson didn’t like what they saw early on and felt he needed more work in the minors. They are all no longer part of the organization, but now Chris Drury and Gerard Gallant saw the same thing.

So who is really at fault? The hockey player or five different members of the Blueshirt organization.

In my opinion, Kravtsov needs to be moved. There is too much bad blood between the organization and the player himself to bring him back and expect all to be forgotten.

Say they brought him back. Say he plays a week or two in Hartford and then is recalled to the team. What message would the organization be sending to all current and future prospects?

It would be a devastating message that says, ‘You don’t need to work hard and earn a roster spot, just say no to going down to the AHL, request a trade, leave the country and we will bring you back with open arms’.

That is not how it’s done. Hard work, effort, and commitment to get better no matter what the circumstances is the route to take to the NHL. For a recent example of this you need look no further than Filip Chytil.

When he was assigned to the AHL, instead of going back home he worked his butt off to prove to the team he can be an effective NHL center. Now, he’s being given the opportunity to play with Artemi Panarin with Ryan Strome out.

Effort, determination, and heart are the three things that led to the success of Chytil. The same three things are what Kravtsov has failed to recognize.

Enjoy watching KHL hockey Vitali, it may be a long, cold wait until you see North America again.

Five teams in on Kravtsov and Yotes working on Kessel trade. Read it here.