If the New York Rangers were considering bringing in a veteran left defenseman on a Professional Tryout (PTO), they’re running out of options. Two prime candidates are now off the board with Calvin de Haan signing a PTO in Carolina and Danny DeKeyser inking one in Vancouver.

Honestly, the Rangers don’t have much cap space left heading into next season. According to CapFriendly, it’s just around a million at the moment ($1,008,531).

Larry Brooks of the NY Post recently suggested that GM Chris Drury may be in the market for a veteran left defenseman in the $800,000 range. With five of their six defensemen locked into the lineup, the only opening is on the third-pair left side to play with sophomore Braden Schneider.

Zac Jones has the inside track for the job with Libor Hajek likely to earn the role as the 7th defenseman. Now that highly-touted prospect Nils Lundkvist has asked for a trade, that only leaves Matthew Robertson as another option.

Robertson is a 21 year-old left handed defenseman that the New York Rangers selected in the second round of the 2019 Draft. At 6-4 and 201 lbs, he already has the size to play in the NHL but has taken a little more time to develop than some of the other prospects on the blue-line. (NHL Experience: 0 games)

At the end of the day, if the Rangers really feel the need for a veteran LD, they may want to bring in a veteran on a PTO (Professional Tryout). Should one of the youngsters not seize the role, New York would have a failsafe already in place.

Of course, giving any PTO defenseman a contract means that one of the players mentioned above will be in Hartford or elsewhere.

Is there anyone left?

The most prominent name out there is veteran Keith Yandle. While his best years are behind him, he can still move the puck and is a great team guy that could help mentor Schneider. The 35 year-old notched 19 points in 77 games for the hapless Flyers last season.

Nathan Beaulieu is another name being floated out there. The 29 year-old played 24 games for the Winnipeg Jets in 2021-22 and recorded 4 assists in those contests. He’s got size at 6-2′, 201 lbs which he couples with 419 career games in the big leagues.

If the Rangers really want to add a veteran, Kris Russell could fit the bill. The 35 year-old has 912 career games under his belt but is a shadow of the defender he once was. He played 31 games for the Edmonton Oilers last season, registering 9 points. Russell also suited up for 6 playoff games.

New York Rangers will be opening training camp on September 21. 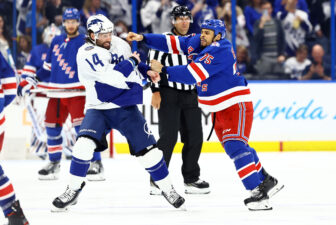