New York Rangers recall Hajek; give Georgiev the start against the Sabres; and more

The New York Rangers have announced the recall of defenseman Libor Hajek from the Hartford Wolf Pack. This ends his conditioning stint.

In five games with the Pack, Hajek picked up two assists and had a rating of +3. He also registered 5 shots and picked up 6 minutes in penalties.

The Rangers were originally supposed to be on the second part of a back-to-back set on Sunday but their game in Ottawa was postponed due to the Senators’ COVID-19 outbreak. Instead, the Rangers had two days to try and fix the things that went wrong in a 2-1 loss to the host Toronto Maple Leafs on Thursday.

New York saw its four-game winning streak stopped when its only goal came from Dryden Hunt early in the third period. Hunt’s goal occurred on a night when the Rangers won nine of 46 faceoffs.

“It’s frustrating,” New York’s Ryan Strome said. “I know we work so hard on it. When you give a good team the puck to start, it’s really hard.”

Buffalo is 2-6-1 in its past nine games since getting off to a 5-1-1 start with a 4-3 overtime win at Anaheim on Oct. 28. The Sabres have allowed 35 of their 49 goals in that span and allowed five goals for the fifth time in their skid on Thursday when they absorbed a 5-0 home loss to the Calgary Flames.

Gerard Gallant announced that Alexandar Georgiev will get the start in goal.

The head coach also noted that Jarred Tinordi would be coming into the lineup but did not say which defenseman would be scratched. The expectation is it’s likely Nils Lundkvist, although Patrik Nemeth has had some struggles as of late. 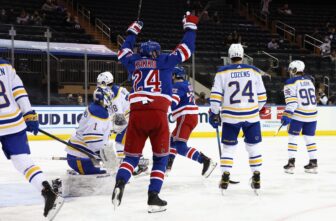 Also Read:
Rangers vs Sabres preview by the numbers: Zibanejad cleared as team looks for a win