The Rangers continue to check off items on their offseason To-Do list. Most recently, after the Gerard Gallant introduction press conference they added two more. Naming a captain, and adding tougher players this offseason.

Let’s dive into some of the latest rumors surrounding the Rangers this offseason.

Mike Kelly was Gallant’s assistant in Florida and Vegas in the NHL. However, the two also worked in QMJHL with the Saint John Sea Dogs. Kelly was an assistant to Gallant from 2010 to 2012 while there. Kelly has also worked as GM and head coach in various other stops, including winning Gold with Team Canada in 2003 at IIHF World U18.

There was already plenty of talk that Kelly would be reuniting in New York with his longtime running mate. During his intro presser, Gallant spilled the beans on the possibility and then gingerly walked it back.

“There’s no decision yet made on staff,” Gallant began. “We’re talking to a lot of people, like you said Mike Kelly has been around a long time with my staff, we’ll see where that goes but there’s nothing done with anybody yet. We’re just talking to guys.”

Considering the success they’ve had together, including winning Gold for Team Canada at the World Championships this month, this one is more than likely to be done soon.

Rangers looking to toughen up this offseason

“It’s hard not to watch these playoffs and notice the physicality, the energy, the effort and the intensity it takes to win and to succeed and we’re certainly going to need to play that way to have success in the regular season and in the playoffs,” Drury responded to a question regarding his Rangers lineup. “We’re always looking at ways to improve the lineup, to add different pieces, just like every team in the league, and every team in the league is watching these playoffs – you know we all want harder players to play against and we’re no different.”

Currently, the Rangers just don’t have the players to fill out bottom six roles properly. Last season for example, Vitali Kravtsov was deployed on the third and fourth line which is not who he is. The young prospect is projected as a top six right winger in the NHL, and the Rangers already have Pavel Buchnevich and Kaapo Kakko occupying those spots.

It is not going to be easy in reshaping the roster that quickly. The biggest decision for Drury will be any major changes to the top six. If he were to trade for Jack Eichel, a player like Kravtsov or possibly Kakko would most assuredly be going the other way. If not, then signing UFA’s like Casey Cizikas, Blake Coleman, or Jordan Martinook creates other problems for some of the younger prospect forwards.

The one thing that is clear, Drury’s mission is to have a more balanced lineup. He wants his third and fourth lines to resemble the way these final four teams in the postseason look.

For the last few months, I have advocated for protecting Colin Blackwell as the 7th forward. I still believe the Rangers will. That means either Brett Howden or Julien Gauthier will be the player chosen by the Seattle Kraken in the expansion draft. Although another Rangers beat writer is hearing something different.

Then there’s Kevin Rooney. For all the noise about the Rangers possibly losing Brett Howden, Gauthier or Libor Hájek to Seattle, I keep hearing that the Kraken have an eye on Rooney, who did a fine job as a fourth-line center and penalty killer and played with a Gallant-style ruggedness. Perhaps the Rangers protect him and leave Blackwell and the three aforementioned from which Seattle GM Ron Francis can choose on July 21?

While I understand the reasoning, there’s other means of getting a 4th line center. If a younger player like Howden or Gauthier are there, that’s who Seattle takes. Remember, Ron Francis drafted Gauthier in Carolina.

If Jack Eichel was the flavor of the last few months, Matthew Tkachuk is emerging as everyone’s new favorite. As far as the disgruntled and injured center from the Sabres goes he was all but already traded to the Ducks or Blue Jackets last week. Just in case you haven’t noticed, he is still sulking in Buffalo. A reliable source told me over the weekend that no deal sounded imminent and that’s pretty much what happened.

Are the Rangers still in on Eichel? If they are, no one seems to know. Even Elliotte Friedman who broke the story that the Rangers made an actual offer last offseason doesn’t mention them anymore.

Now we get to Tkachuk. Here’s the deal, Larry Brooks got the ball rolling when he just threw it out there that if he were to become available the Rangers should move Heaven and Earth to get him. I didn’t agree with that then and I still don’t.

Then last weekend, Sportsnet’s Shane O’Brien said he heard Tkachuk wants out of Calgary. That was followed up by Ryan Pinder of The Fan960 going directly to his sources with the Flames. “In reaching out to some folks around the organization, they described this rumor in two words,” he began. “The first one being bull and the second one sounding a lot like shirt.”

Which brings me back to what I wrote this week about the Tkachuk rumor. Why would Calgary trade the 23 year-old RFA? He has a year left and they own his rights, so at this time Tkachuk is more of a fantasy than a legit trade target. 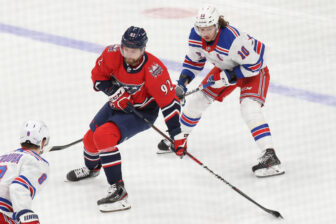