The New York Rangers have been streak busting for the last two games and are hoping to avoid the Philadelphia Flyers stopping their own winning streak.

On Thursday night, the Blueshirts halted the Toronto Maple Leafs 15 game points steak and Mitch Marner’s 23 straight games with a point. That was coming off the heels of stopping the New Jersey Devils road winning streak just one game shy of an NHL record.

Heading into a back-to-back set beginning in Philadelphia tonight and ending in Chicago versus the Blackhawks on Sunday, the Blueshirts have won a season-high five straight.

“It just comes down to playing a full 60 minutes,” Barclay Goodrow said after practice on Friday. “We’ve put together good spurts but it’s always that last 20 (minutes) where we let our game slip. Having all 20 guys on board is crucial for us and we’re seeing the results go in our favor.”

After one of their best performances of the season en route to their fifth straight win, head coach Gerard Gallant was extremely complimentary.

“Good effort by our group,” he said. “The whole group played really well. A team effort from start to finish. Everybody bought in.”

At practice on Friday, the team rolled with the same lines that finished Thursday’s match. That should mean forward Vitali Kravtsov and defenseman Ben Harpur will get another look.

Harpur, a journeyman defenseman, debuted with a little over 13 minutes of ice time and posted three hits, two blocks and even rating.

“I thought he played really solid,” Gallant said of the 27 year-old. “He’s a big body and has a real good stick. [Gord Murphy] was happy with him.”

While the lineup may be set, it remains to be seen who will start the first game of the back-to-back weekend. We know Jaroslav Halak will play in one of these games and he has a better career record versus the Blackhawks (10-3-3) than the Flyers (11-7-3). Although he did lose his last appearance against Chicago at the Garden on December 3. That was also the last time the Rangers took an L in the standings.

The Philadelphia Flyers may be near the bottom of the standings, but under John Tortorella they’re no easy opponent.

In their last four games, they are 1-1-2 and all were decided by one goal. They beat the New Jersey Devils on Thursday thanks to Carter Hart’s strong goaltending as he made a career-high 48 stops in a 2-1 road win.

“I just liked his whole demeanor through the game,” Torts said. “I’m not a goalie coach, but there wasn’t a lot of extra movement, he looked calm. It’s one of the better games I’ve seen him play.”

Coming into the matchup, former Rangers Kevin Hayes leads the team in scoring with 29 points in 31 game despite being benched in the third period in their last contest.

UPDATE: Kevin Hayes will be scratched for tonight’s game. 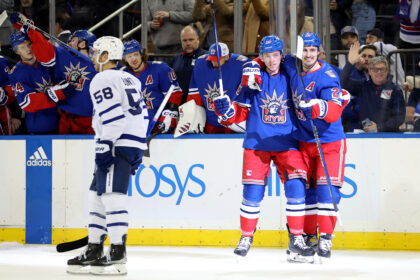