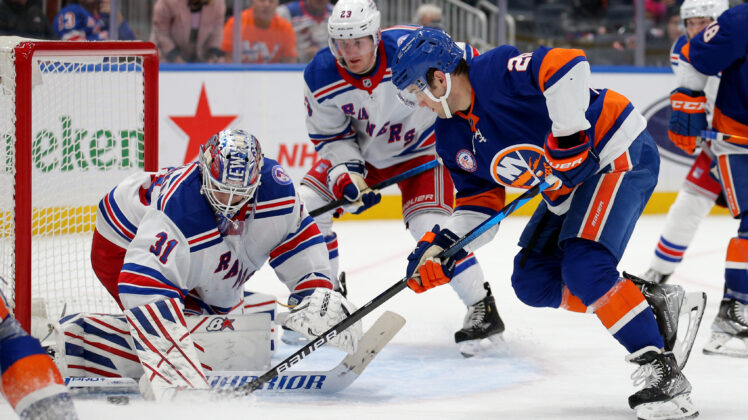 The New York Rangers and New York Islanders are ready to go on St. Patty’s Day. However, when the Blueshirts hit the Garden ice they are expected to have some fresh blood in new acquisition Frank Vatrano.

Vatrano, 28, was obtained by the Chris Drury in exchange for a fourth round pick. He’s an automatic upgrade for the third line over players like Julien Gauthier and Jonny Brodzinski. This season he has 10 goals and 19 points through 49 games.

Morgan Barron was sent down to the Wolf Pack to make room.

The two teams were originally scheduled to face off at Madison Square Garden on Nov. 28 until a COVID-19 outbreak on the latter club resulted in a postponement.

The rescheduled game is Thursday night. The Rangers will continue their playoff push by going for a third straight win, while the Islanders likely will embrace the role of spoiler as they currently reside well out of the postseason race.

The Rangers skated to a 4-1 win between the teams Nov. 24 in a game in which the Islanders played without captain Anders Lee, fellow forwards Josh Bailey and Ross Johnston and defensemen Zdeno Chara, Andy Greene and Adam Pelech due to COVID-19 protocol.

“They had a lot of stuff with them going early on,” Gerard Gallant said of the Islanders. “They are a hard working team and a competitive. They are trying to battle back and get back into the thick of things…I think it’s going to be a great hockey game.”

The Rangers improved to 12-4-3 after that victory, which was part of their seven-game winning streak. Now, they reside in second place in the Metropolitan Division, six points behind the Carolina Hurricanes with 22 games remaining, including a visit on Sunday to Raleigh, N.C.

The Rangers are 10-4-1 in their last 15 games, including a 7-1-1 mark at home. After getting outscored by a combined 11-4 last week in lopsided road losses to the Minnesota Wild and St. Louis Blues, the Rangers rallied for a 7-4 win at Dallas on Saturday and followed it up with Tuesday’s 4-3 overtime victory over the Anaheim Ducks that marked their 20th comeback victory.

“I think it speaks to how focused this group is on accomplishing our first goal, which is to make the playoffs,” Rangers forward Chris Kreider said. “Regardless if the game is not going well or you don’t feel like you’re going well individually, guys are able to refocus and help the team try to win a hockey game.”

Defenseman Adam Fox scored 55 seconds into overtime, giving him 25 points (four goals, 21 assists) in his past 20 games. Kreider scored his 39th goal to tie Edmonton’s Leon Draisaitl for second in the NHL, while Artemi Panarin set up three tallies to boost his assist total to 11 during his five-game point streak.

“We’re a confident group. We never think we’re down and out,” Fox said.

Islanders clawing to get back into playoff race

The Islanders were in the midst of an 11-game winless streak when they opened the season series against the Rangers. The Isles are a respectable 19-14-4 since the skid to reach NHL .500, however they reside 19 points behind the Washington Capitals for the second wild-card spot with 25 games remaining.

The Islanders saw their three-game winning streak halted on Tuesday in a 4-3 shootout loss to the Capitals. They fell in the eighth round of the shootout after Lee missed the net.

Brock Nelson recorded his fifth goal in six games, but it was not enough despite the Islanders scoring at least three goals for the fifth consecutive contest.

“We’ve said a couple of times we’ve done good things and didn’t get the result,” Nelson said. “Just putting it bluntly, knowing where we’re at and the time of the year, we’d like to have that one in regulation.”

Jeff Gorton gets a boatload for Ben Chiarot

Former Rangers GM had a price for rental defenseman Ben Chiarot and got it (plus more). Check out the full deal and its implications here.