New York Rangers vs Kings matchup: Win one for Gallant

The New York Rangers will face the Los Angeles Kings for the first this season. They will do so without Head Coach Gerard Gallant, who is out on COVID protocol.

The Blueshirts have earned at least one point in 13 of their last 19 games against the Kings (9-6-4). Overall, the team has earned a point in six of their last eight games (5-2-1).

Artemi Panarin – 12 GP, 5G-5A-10 PTS – Panarin has goals/points in three-straight games (4G) against the Kings and at least one point in eight of his last nine games against Los Angeles (5G-4A).

Point Distribution: The Blueshirts are one of two teams (Colorado Avalanche) in the NHL to have 4 players with at least 30 points (Panarin 36, Fox 36, Kreider 32, Zibanejad 32).

Road Warriors: This will be the Rangers 22nd road game of the season, which will make them even with Calgary for most in the NHL. Their 28 road points ranks tied for 1st in the league. After this trip, 26 of the final 43 games will be at MSG.

Artemi Panarin’s 36 points is tied for 9th in NHL scoring.

Adam Fox’s 36 points is tied for first in scoring among defensemen.

Mika Zibanejad is 1 overtime goal away from tying Cecil Dillon, Butch Keeling and Brian Leetch (7 each) for the most overtime goals by a player in Rangers history. 1 SHG to tie for top 10 in shorthanded goals. 2 goals from 150 as a Ranger. 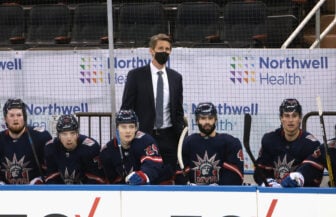