New York Rangers worry about their game, not the Penguins

The New York Rangers and Pittsburgh Penguins will kick off their first round playoff series on Tuesday night at Madison Square Garden at 7 PM ET. For more details click here.

You have to give Gerard Gallant a ton of credit for what’s he been able to accomplish in his first season as New York Rangers head coach.

The team improved by leaps and bounds under his guidance, finishing with 110 points. Last year’s Blueshirts led by David Quinn finished with 60 points in a shortened season. Which would have translated to around 88 points for a full 82 game slate.

In fairness, the Rangers has lots of rookies and second year players on it in 2020-21. Plus they were one dimensional without the likes of Barclay Goodrow and Ryan Reaves.

Regardless, you still need a great coach to lead the way. That coach also needs to have a consistent message, and for Gallant it’s all about what his team can do.

“That’s the way I coach,” Gallant said on Monday. “I worry about what our team can do against the other team.”

New York Rangers ready to take on Sid and company

A lot is being made about the Pittsburgh Penguins playoff experience and the New York Rangers lack of it.

“I know they have great players. Sidney Crosby, Evgeni Malkin, and Kris Letang are a different animal. But if you’re going to worry about that then we’re not going to play our game.” Gallant explained. “I’ve got trust in my four lines. If our fourth line gets scored against, so be it. I know the matchups we want and they won’t work all the time. I want them to worry about our lines.”

The Rangers last saw playoff action in 2017 when you discount the 2020 Playoff Qualifiers in the Bubble, which was a forgettable 3 game sweep to the Carolina Hurricanes.

Despite the so called lack of experience, it doesn’t seem to be a big deal to the players. Andrew Copp spoke specifically about that on Sunday.

“I don’t think experience is all that it gets chalked up to be,” said Copp, who saw playoff action with the Winnipeg Jets. “They’re just three really good players and their team is very good– I think our team is very good, too. I think we’re ready for this challenge. It’s definitely going to be a great series and we’re looking forward to it.”

Chris Kreider, who led the team with 52 goals and a league leading 26 power play goals is ready to get back to playoff action after a long drought.

“It’s a lot of fun… it’s exciting,” Kreider said. “We tried to play a specific way for 82 games so that shouldn’t change for us now.”

Rangers know what will work

The Rangers dominated the Penguins during the regular season going 3-1 in their four meetings and outscoring them by 7 goals. They beat them with the same recipe for success that led them to a second place finish and home ice for this series.

“I think when we pressure teams with our speed and attack it makes them worry about us,” Gallant said. “The better we are in our d-zone and breaking up attacks the better off we’re going to be. If we play the right way we have a good chance to win every night.”

One area that New York relied on for success was the power play, which they scored 55 times with during the season. That was good for fourth in the NHL at a 25.2 success rate.

“It’s always a little more difficult to score power play goals in the playoffs,” Kreider explained. “Ice gets chopped up a little quicker. The rink is a little warmer and teams seem to pressure that much harder. So it’s about keeping it simple and adding value, but we have to keep it 5 on 5.”

Even though they have all that experience, the Penguins feel like an underdog coming into this series.

“We certainly feel like it,” Letang said. “(It’s) a team I’ve been around for a long time. And when I have a guy like Sid (Crosby), (Evgeni) Malkin, Jeff Carter, (Jake) Guentzel, that core group, you have confidence in what you can bring. If we’re underdogs, fine. That’s all right.”

Pittsburgh hasn’t won a playoff series since beating the Flyers in the first round of 2018. That drought may continue against the Rangers with number one goalie Tristan Jarry out for at least the first two games with a foot injury that required a walking boot.

In his stead will be Casey DeSmith. The 30 year-old posted solid numbers with a 2.79 GAA and a .914 SV% for a 11-6-5 record this year. However, he did not play this season against the Blueshirts.

This will be DeSmith’s first postseason start of his carer. His lifetime stats against the Rangers is 3-2-1 record with a 3.45 GAA and an .886 SV%. 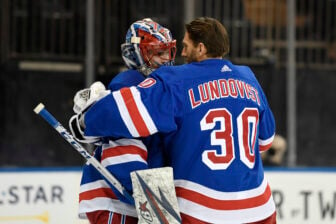 Also Read:
Lundqvist and Valiquette weigh in on Igor Shesterkin as Rangers prep for Penguins

Check out the latest on the futures of Islanders forward Mathew Barzal. Plus what’s up with the Jets’ Mark Scheifel and Blue Jackets’ Patrik Laine.