It is now two weeks since the opening bell of the free agent season on July 28th. As many of the best UFA’s have come off the board, teams most likely are determining if they want to add some players at bargain prices.

As we continue to get deeper into August, the players remaining become more likely to sign 1 year deals at “Crazy Eddie” prices. Let’s take a look at the best available.

-This article was first published at The Daily Goal Horn.

Joe Thornton (C): At 42 years of age, Jumbo Joe can still help a hockey team out. Last season, Thornton played on an offensive machine in Toronto. He also dealt with limited travel that helped alleviate stress on his aging body. Playing in 44 games, he notched 20 points. His points per game was almost on par for the previous season with San Jose, but a far cry from his point a game days.

James Neal (F): The 33 year-old had just five goals and five assists (10 points) in 29 games during his season with the Oilers. Overall, he has 294 goals and 261 assists (555 points) in 13 seasons with the Dallas Stars, Pittsburgh, Nashville Predators, Vegas Golden Knights, Calgary Flames and Edmonton. Someone is going to give him a 1 year deal.

Sami Vatanen (D): I am always shocked that a solid right-handed defender like Vatanen continues to be available. He certainly doesn’t put up the offensive numbers as he used to, but he can still help a defense out. He’s only 30 years-old so I expect him to not stay unsigned for much longer.

Ryan Donato (F): Another rare 25 year-old UFA, the Sharks opted to not give him a qualifying offer. This was the same issue with both Nick Ritchie and Ondrej Kase in Boston. Donato scored 20 points in 50 games last season and should be picked up before the season starts.

Jason Demers (D): He’s a right-handed defenseman that can still play third pair minutes. In 41 games, the 33 year-old veteran picked up just 4 helpers for the Coyotes. He’s a prime candidate for an invite to a training camp on a professional tryout (PTO).

Tyler Bozak (C): The 35 year-old scored 17 points in 31 games last season playing bottom six minutes. There’s no doubt he can still be a productive contributor. He has a one year deal from the Blues available to him, but is currently seeing what else is on the market.

Eric Staal (C): Last season, the 36 year-old pivot split time between the Sabres and Canadiens but only managed a career low 13 points in 53 games. To make matters worse, he set a career high with a -30 plus/minus rating. Of course, Staal could bring value to a team’s fourth line next season at a bargain price. His leadership and experience would be worth the money alone.

Travis Zajac (C): The Islanders acquired Zajac at the trade deadline along with Kyle Palmieri for additional center depth heading into the playoffs. At 36, he score 20 points in 46 games and added another 2 points in 14 playoff contests. There’s a rumor that he has also agreed to return to the Island.

For those of you that didn’t get the Crazy Eddie reference, it’s because you are under 40. 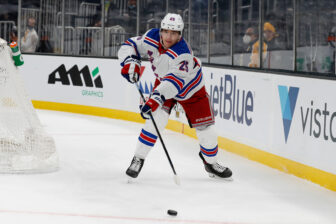 Also Read:
Does Libor Hajek have a future with the New York Rangers