The opening bell of the free agent season started on July 28th. There have been a number of signings in recent days, but mostly of the restricted free agents or players being extended before their current deals are up.

Here is a list of the top UFA’s still remaining on the market.

Casey Cizikas (F): The Islanders “Identity Line” center should be the top free agent the Rangers should target. He wins draws, and scores clutch goals in the postseason. Cizikas isn’t physically imposing at 5-11 and 195 lbs but he plays so much bigger than his size. It’s rumored that he has a deal in place with the Islanders but Lou Lamoriello is likely working on something else and doesn’t want his cap situation known.

Kyle Palmieri (F): The 30 year-old Long Island native struggled during the regular season after his acquisition. In 17 games he collected just four points with some doubting why the Islanders went hard to obtain him. Then the playoffs rolled around and he came alive with 7 goals and 2 assists in 19 games. There was several reports that the Islanders and Palmieri reached a deal but noting official yet. As to why it has not been announced, see the note on Cizikas.

As we continue to get deeper into August, the players remaining become more likely to sign 1 year bargain deals. Let’s take a look at those candidates.

James Neal (F): The 33 year-old had just five goals and five assists (10 points) in 29 games during his season with the Oilers. Overall, he has 294 goals and 261 assists (555 points) in 13 seasons with the Dallas Stars, Pittsburgh, Nashville Predators, Vegas Golden Knights, Calgary Flames and Edmonton. Someone is going to give him a 1 year deal.

Sami Vatanen (D): I am always shocked that a solid right-handed defender like Vatanen continues to be available. He certainly doesn’t put up the offensive numbers as he used to, but he can still help a defense out. He’s only 30 years-old so I expect him to not stay unsigned for much longer.

Jason Demers (D): He’s a right-handed defenseman that can still play third pair minutes. In 41 games, the 33 year-old veteran picked up just 4 helpers for the Coyotes. He’s a prime candidate for an invite to a training camp on a professional tryout (PTO).

Tyler Bozak (C): The 35 year-old scored 17 points in 31 games last season playing bottom six minutes. There’s no doubt he can still be a productive contributor. He has a one year deal from the Blues available to him, but is currently seeing what else is on the market.

Travis Zajac (C): The Islanders acquired Zajac at the trade deadline along with Kyle Palmieri for additional center depth heading into the playoffs. At 36, he score 20 points in 46 games and added another 2 points in 14 playoff contests. There’s a rumor that he has also agreed to return to the Island. 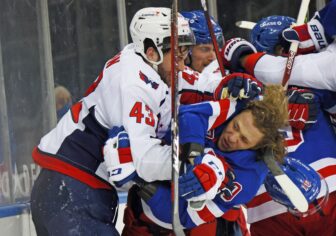 Also Read:
The Tom Wilson incident didn’t break the Rangers; it woke them up