Not Again! Stanley Cup dented during Avalanche on ice celebration

The Stanley Cup dented again? Wow! That was quick.

It took all of about 5 minutes for the Stanley Cup to be dented this season when Nicholas Aube-Kubel took a spill with the trophy in hand on his way to the team photo. The base was instantly flattened.

“I don’t know if they’ve had it five minutes and there’s a dent at the bottom of it already– right in the middle of the team photo,” Philip Pritchard, the keeper of the Cup said. “It’s the third time the Avalanche have won it. I guess we’ll have a little chat with them soon to go through the process of how we’ll repair it but the Stanley Cup tour will go on.

“I guess it’s a new record today five minutes into the presentation,” he continued. “It’s the first time it’s ever happened on the ice. Hopefully that’s the only damage that happens this summer.”

The Colorado Avalanche are the 2022 Stanley Cup Champions by beating the Tampa Bay Lightning 2-1 in Game 6 on Sunday night.

When they took their spot at center ice for the team photo, Aube-Kubel took a big spill and dented the Cup. In the video, you can see the eyes and jaws of his teammates pop and drop after seeing the damage.

Aube-Kubel shouldn’t feel too bad as last summer Pat Maroon crushed the top of the Cup during the Lightning’s boat parade.

Maroon was on ESPN Radio to clear up what happened and to put an end to some critics saying the Lightning disrespected the Cup.

“It was obviously raining and it was wet,” Maroon began to explain. “I went to lift it and I went flat backwards with it. I slipped.. the Cup went back on its end and people were saying we disrespected the Cup.”

That notion really upset the winner upset him. As the winner of three straight Stanley Cup at the time, he was insulted with the idea of being disrespectful.

“Such BS, because you know if they had half a brain, you know it’s wet outside,” Maroon said with hint of agitation. You think we’d be throwing the Cup around? No, we didn’t disrespect it. It was a complete accident, and we both got hurt. My back has been hurt all day today. But yeah, that’s what happened. Nothing crazy.” 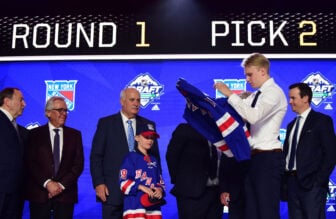