NY Rangers look to avoid another loss to the Red Wings

The NY Rangers are looking to snap a 3 game losing streak in Detroit on Thursday night. It’s been a difficult stretch for the Blueshirts, who opened the season at 3-1-0.

Since that start, they’ve gone on a 3-4-3 run that has them sitting in 5th place in the Metropolitan Division.

Head coach Gerard Gallant spoke with the media at the morning skate and announced that Igor Shesterkin will be back in goal.

“We’re not putting any losses on him,” Gallant said of his starter. “Games we won last year, we found ways to win and this year we seem to be finding a way to lose them. We have to correct that.”

It looks like defenseman Ryan Lindgren will be back in the lineup paired with Adam Fox. The 24 year-old has missed the last two games after being blindsided by the Bruins’ David Pastrnak last Thursday.

This should help the Rangers big time after blowing back-to-back two goal leads against the Red Wings and Islanders.

“I know what my role is,” Lindgren said. “It’s something I take pride in being good defensively and being hard to play against. Bit it’s a team effort and we all have to commit to play harder in the d-zone.”

Overall the Rangers have been the better team in many games this season, but have struggled to put together a full 60 minutes.

In an effort to spark his team, Gallant is reuniting the Kid Line with Alexis Lafrenière, Filip Chytil, and Kaapo Kakko.

During the playoffs, the trio of first round picks formed the team’s most energetic line combination. Their shifts often turned the momentum around for the Blueshirts en route to a trip to the Eastern Conference Final.

“I’m happy to play with them for sure,” Lafrenière said after the skate in Detroit. “We’ve lost a couple of games in a row. We just have to get back to playing simple.”

The Detroit Red Wings keep playing well despite a rash of injuries that now has Matt Luff added to it. Against the Canadiens, he was slammed into the boards face first by 2022 first overall pick Juraj Slafkovsky, who was given a five-minute boarding penalty and has been suspended by the NHL for two games.

Also out for Detroit up front are Tyler Bertuzzi, Robby Fabbri, and Filip Zadina.

Oskar Sundqvist may return to the lineup tonight. He hasn’t played since Oct. 25 due to an upper body injury. 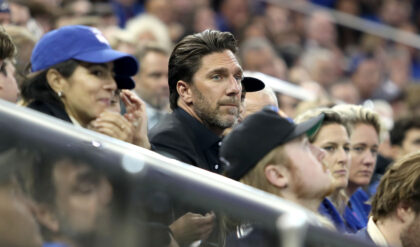