Rangers Roundup: New additions all in vs Devils, Gallant on his lineup, and more 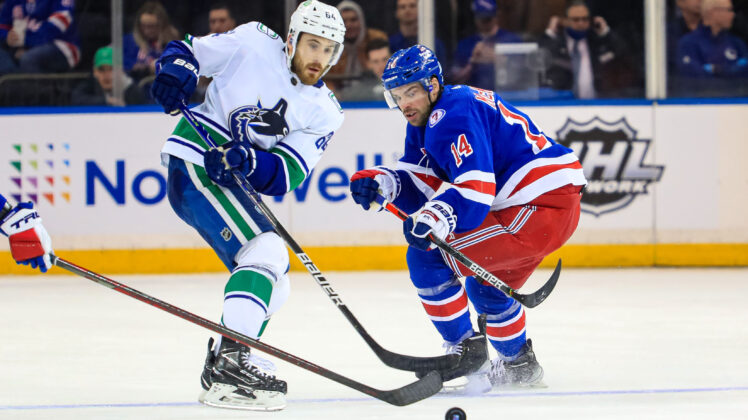 The New York Rangers will continue their quest for first place Tuesday night in Newark, N.J., when they visit the New Jersey Devils.

Per head coach Gerard Gallant, all three will be in the lineup tonight.

The Rangers held a morning skate and it provided a look at just how Gallant will set his lineup. Based on multiple reports the expectation will be as follows:

Of course, the first question asked of Gallant was what will happen with Braden Schneider, who will be a scratch for tonight’s contest.

“It doesn’t mean because we brought Braun in that Schneider won’t be in the top six,” he explained. “It’s going to be a competition.”

Gallant also discussed that Copp’s versatility to play all three forward positions may come into play, but he will start on the wing over his preferred center position.

As for Motte, Gallant is looking forward to him using his speed and bringing some scoring to the fourth line.

“Excited with what we were able to do and get the players we were able to get, and excited to see them play hopefully as soon as tomorrow,” President and General Manager Chris Drury said after the deadline passed.

Tonight, he will get to see his new acquisitions in action.

“I was excited first off,” Motte said about his trade to the Rangers. “It’s a weird moment leaving a city you’ve been in for a few year. But excited to play meaningful games and make a run with these guys.

“It’s a quick turnaround for sure. Let’s get after it.”

Copp played with Motte and Trouba in the past and was stoked to be with them again.

“Having (Motte) and Troubs, guys that I consider like brothers that are here, makes the transition a lot easier,” Copp said. “It was tough saying goodbye to people (in Winnipeg).

“Getting into a game is probably the best way to get to know the guys a little bit. Wear off the (newness) of it and get into the flow as quickly as possible.”

As for the 35 year-old veteran Braun, he was happy to back on a winning team and to get a chance at the playoffs.

“Playing meaningful games again is exciting– I can’t wait for it,” Braun said.