The New York Rangers will be getting a boost to their lineup when they face the Los Angeles Kings on Monday night. That’s because Artemi Panarin has been cleared from COVID protocol and is practicing, along with Patrik Nemeth today.

Last night, the Ranger became the fourth team in the NHL to reach the 50-point mark (FLA, TBL, CAR) by beating the Ducks 4-1. It’s the fastest to 50 points since the the 2011-12 season, doing it in 36 games. New York also has at least one point in six of their last eight games heading into the match against the Kings.

New York Rangers forward Artemi Panarin and assistant coach Mike Kelly were added to the NHL’s COVID-19 protocol list on January 2. Kelly has yet to be cleared. Igor Shesterkin, Ryan Reaves, and Julien Gauthier remain on the COVID list.

Panarin, 30, is tied for the Rangers lead in points (36) with defenseman Adam Fox.

The Rangers practice lines appear to be similar to that from last night’s contest against the Ducks. According to multiple reports, Patrik Nemeth appear to be the third pair on defense. So that is a possible change to look for. 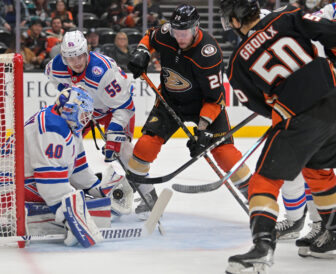