Brennan Othmann is bringing it at the World Junior Championship. After scoring 50 goals and 97 points in 66 games for the Flint Firebirds in the OHL, a lot of attention has been on his offensive abilities.

Those stats have earned him the right to skate on a line with Mason McTavish, the third overall pick by the Anaheim Ducks in 2021, and potential 2023 first overall pick Connor Bedard.

So far in this tournament, Othmann has picked up 2 goals and 4 assists in four games. Solid numbers for sure, but it’s been his physical play that is getting everyone’s attention.

“He finishes every check,” McTavish said. “He plays hard. He plays the right way.”

Othmann prides himself on playing tough

Othmann, 19, checks in at 6′ and is continuing to fill out his frame which is around 185 pounds. The left-handed shot is a skilled playmaker with an excellent release and is always a danger to score from the right circle.

In an exclusive interview with Forever Blueshirts contributor Steven Voogel, he said he sees himself as a mix between Winnipeg’s Kyle Connor and Florida’s Matthew Tkachuk.

“Tkachuk is not afraid to mix it up, hits hard, and he can play any role,” he said. “Connor has an unbelievable shot and hockey IQ. That’s how I like to play. Tkachuk’s grittiness and Connor’s skill.”

However, at the World Junior Championship playing with two skilled forwards, he’s stepping up his physical play in a big way.

“That’s a very underrated part of my game. I’m very physical,” Othmann said. “I like to have that edge to my game. That’s how I think I get under a guy’s skin. I’m almost 190 pounds and I play like I’m a little bit heavier. If I can create momentum like that and even get the building into it, it’s great for us.”

Canada will be facing Team Czechia today for the right to advance to the Gold Medal game on Saturday. You can expect Othmann to bring his best, which will be combination of high-end offensive talent and a heavy dose of hard-hitting action.

Othmann’s goal is to make the Rangers

Othmann is widely considered one of the top New York Rangers prospects after being selected in the first round of the 2021 NHL Entry Draft 16th overall.

Due to his age, Othmann is not eligible to play with the Hartford Wolf Pack at the start of the season. He will either make the team out of training camp or return to the Flint Firebirds for one more year.

“The goal is to try and make the team the best that I can,” Othmann stated. “I know they’re a strong team with good young players and good leadership too. I had a good season and played well for myself and [Flint]. If I can come in with that amount of confidence into Rangers camp and make the team it would be something special.”

“I’m glad that’s what his goal is,” Drury replied. “He’s a big time goal scorer and had a good year putting the puck in the net. He’s got a little bit of an edge to his game too. He’s a feisty kid that’s very competitive and does a lot of things we like all over the ice.” 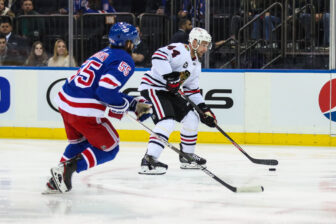