New York Rangers prospect Brennan Othmann was part of a high-profile trade in the OHL this past weekend. The Flint Firebirds traded him to the Peterborough Petes for San Jose Sharks prospect defenseman Artem Guryev, a 2024 second-round pick, a 2023 third-round pick and a 2026 third-round pick.

Apparently, the trade request was initiated by Othmann some time ago as he confirmed that with The Peterborough Examiner in an interview that was published late Saturday.

“Peterborough came to mind because it was close to home and I know a few players on the team I am close to,” Othmann said. “It’s been a fun couple of days trying to get organized and see what team I was going to go to and Peterborough obviously swayed a bit more than others.”

For Othmann, who has family two hours away in Scarborough, Ontario this was a great fit. In a long message on social media, he revealed that his grandparents have not been doing well with their health and played a role in this decision.

“I never turn to social media but I woke up this morning as a former Firebird and a new Petes so I felt like I should thank both fan bases,” Othmann explained. “I have two grandparents that are struggling with health issues and being closer to home to be with my family is what makes sense to me at the moment. I hope fans can understand that.”

Another critical factor noted by Mike Davies of The Peterborough Examiner was input from Othmann’s agent, Pat Morris and Team Canada teammate Mason McTavish. Morris also represents McTavish of the Anaheim Ducks, who was a former Pete.

When asked why Peterborough, he replied: “Because of the coaching staff. The coaching staff is great. They teach their players pro stuff. You saw what they did with Mason. They made Mason a better hockey player. I know Mason pretty well and he convinced me as well it’s a great place to live and to play and that I’ll love it there.’

Brennan Othmann via The Peterborough Examiner

Othmann debuted for the Petes on Sunday and struggled with a -3 rating and 2 shots on goal. Peterborough’s next game is scheduled for this Thursday against the Oshawa Generals.

Othmann will be better off for the move

Othmann, 19, was selected by the New York Rangers in the first-round of the 2021 NHL Entry Draft. The forward scored 50 goals and 97 points in 66 games for the Firebirds in 2021-22. This season, Othmann is off to a great with 11 goals and 24 points in 17 games on 85 shots. He also has 31 penalty minutes and displaying a an edge to game akin to Florida’s Matthew Tkachuk.

“Tkachuk is not afraid to mix it up, hits hard, and he can play any role,” Othmann told Forever Blueshirts in an exclusive interview this summer. “(Kyle) Connor has an unbelievable shot and hockey IQ. That’s how I like to play. Tkachuk’s grittiness and Connor’s skill.”

This will be Othmann’s last year in the OHL, so the trade for Flint makes sense for their future. Spending time with the Petes, who’ve had recent success developing a recent NHL talent should help Brennan long term.

Othmann signed his entry-level contract with the Rangers on August 12, 2021 and should be a legit candidate to make the team next season. Even if he doesn’t make it out of camp, he will no longer be restricted by the CHL rules that players 20 and under can’t be sent to the AHL. 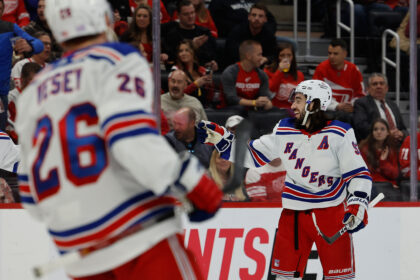