Rangers Chris Kreider has put himself into the Hart Trophy conversation 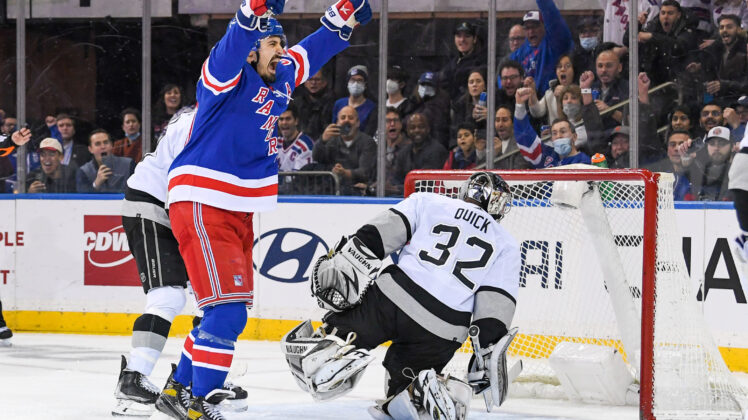 New York Rangers’ Chris Kreider reached a personal milestone on Saturday night when he recorded a hat-trick to reach 29 goals on the season. He added to that total last night with his 30th goal on the power play against the Kings.

The longest tenured member of the Blueshirts should now be discussed in any Hart Trophy conversation for NHL MVP.

After scoring his third goal of the game on Saturday, Kreider drifted towards the glass behind the Arizona Coyotes net, and held his arms up high, enjoying the moment with the Garden Faithful.

Rangers fans have had a lot to celebrate especially when Kreider is on the ice. This is the kind of season they’ve been looking for since he made his first appearance in the playoffs in the 2011-2012 season. It seems Kreider can’t do anything wrong.

He has been leading the Rangers on the ice all season. He leads the team in even-strength goals (13), and power-play goals (15), and is third on the team in points with 43. Artemi Panarin is second with 45 and reigning Norris Trophy winner Adam Fox with 46 points.

He even added another weapon to his game by joining the penalty-killing unit and has scored two shorthanded goals leading the team in another category.

Kreider is in his 10th season on Broadway. The 30-year-old from Massachusetts has always shown some flair in his game, but his biggest struggle was consistency. That problem no longer exists in his game as he has become one of the most dominant offensive scorers in the NHL this season.

Kreider stats are outstanding at the midpoint of the season

Kreider currently leads the NHL in goals with 30 and is also first with 15 power-play goals. His 43 points is tied for 10th in overall scoring.

What he has done off the ice is as important as on the ice. Kreider has become the face of the Rangers as he has been the one at the podium,post-games, answering the media’s questions.

A team-first attitude is what fuels Kreider during these sessions. A question was asked of him following the team’s 7-3 comeback win over the Arizona Coyotes on Monday night.

Asked how it feels to go head-to-head with Ovechkin for the NHL goals lead, he said:

“We’d like to pull ahead of them in the standings, for us, it’s just about finding ways to win hockey games.”

Kreider has put the team in front of any personal goals or accomplishments that may come his way. This team has gone through a lot of changes over the last four seasons with Kreider being the lone member from the team that made it to the Stanley Cup Finals in 2014.

Making the playoffs has been the goal since training camp began, Kreider recognizes that his play on the ice this year will contribute to a playoff run,

“The best thing about playing hockey is winning games,” he said. “From a personal standpoint, scoring goals helps our team wins. If I can keep doing that and helping our team win, that’s all that matters. We want to make playoffs. That’s something we said from day one.”

His leadership has been contagious to the other players. You see it every practice and every game with his linemate Mikz Zibanejad. The two have a “Bromance” that the two are not shy to display. They are the last two off the ice after every game, and have both assumed the role as unofficial captain this season.

The Hart Memorial Trophy is an annual award given “to the player adjudged to be the most valuable to his team.” The winner is selected in a poll of the Professional Hockey Writers’ Association in all NHL cities at the end of the regular season.

The definition on its own is a strong descriptive of what Kreider has been for his team in the first half of this season.

A consistent second half is not only crucial to the chances of Kreider being nominated for the Hart Trophy but it’s absolute for the Rangers to make the playoffs.

Regardless of whether he is nominated for the trophy or not, Kreider has already won the praise of his coaches and the respect of his teammates.

That and another run to the Stanley Cup Finals would be more than enough for the veteran player.