The New York Rangers made their first trip back to Winnipeg since the pandemic broke out in February of 2020. In that game, Igor Shesterkin was rock solid picking up a 4-1 win.

When it was all said and done, the Rangers picked up a huge victory to start a 4 game road trip by the same score.

The Blueshirts made their first long distance trip in awhile and showed no signs of jet lag to start the game. Barclay Goodrow converted a goalmouth feed from Jacob Trouba just 2:01 in. Winnipeg opted not to challenge for offside as Jonny Brodzinski appeared to hold the line. Filip Chytil picked up the other assist.

“Troubs got the loose puck and found me in front,” Goodrow said. “Nice to get the lead and the game started in a good way.”

New York got into some penalty trouble after the goal but were able to kill both penalties before getting two consecutive power plays themselves.

On the second man advantage it was none other than Chris Kreider putting home a deflected Artemi Panarin pass for his 37th of the season and 19th on the power play. Adam Fox gathered the other helper.

With Alexis Lafrenière off for hooking, Nikolaj Ehlers’ low screamer made it’s way past Shesterkin’s left pad. The Blueshirts would take their fifth penalty of the game just a little three minutes after the goal but were able to kill it off.

Winnipeg held a 29-16 shot advantage thanks to the penalties, but Shesterkin’s goaltending brilliance persisted.

The Jets played the third period with a lot of desperation but the Rangers used their aggression against them.

After two in tight stops by Shesterkin, Mika Zibanejad grabbed a blocked shot and used the boards to find a streaking Kreider. The Rangers leading goal scorer put the puck over Connor Hellebuyck to give his team a 3-1 lead.

“Two points, six more to go,” said Kreider, deflecting focus off himself and back to the team.

A little over three minutes later, Panarin stole the puck in the offensive zone and passed it to the point. Trouba let loose a big shot that was tipped by Zibanejad for the insurance marker to make it 4-1.

Update: The NHL determined Zibanejad did not touch the puck, so the goal now goes to Trouba, his 9th of the year.

Shesterkin ended the game with 45 stops, which is a season high. His 46 saves against the New Jersey Devils set back on January 9th, 2020 is the most for a single contest. It was just the second game of his career.

Editor’s Note: Article amended to reflect Shesterkin’s updated save totals from 44 to 45. 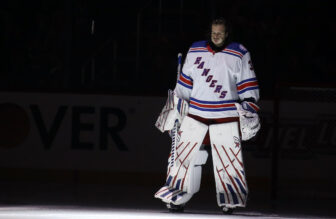 The latest Trade Bait Tracker has been updated and now contains 35 names. Check out who is the top target for teams with just two weeks left before the NHL Trade Deadline. Read more.