When the Rangers escaped with a win over the expansion Seattle Kraken on Sunday afternoon, the best thing New York coach Gerard Gallant could say was that his team picked up another two points.

The Rangers hope to put together a significantly better showing Tuesday night when they host the league-leading Florida Panthers, who are seeking a fifth straight win.

New York is 10-5-0 over its past 15 games since a 4-3 loss at Florida on Dec. 29. After blowing two-goal leads in consecutive losses to the Columbus Blue Jackets and Minnesota Wild, the Rangers eked out a 3-2 victory on Sunday when defenseman K’Andre Miller scored with 34 seconds remaining.

Miller’s goal capped a game in which the Rangers were outshot 42-24, marking the sixth time in eight games they were held under 30 shots on goal.

“I just felt disappointed,” Gallant said after Monday’s practice. “We win a hockey game and it’s great to get the two points, I feel a lot better today. But you got one more game to play (before the All-Star break). Let’s be ready for arguably the best team in the league.”

Sunday marked the third time this season the Rangers allowed at least 40 shots on goal, and they are unbeaten in those games thanks to goalie Igor Shesterkin, who is 8-1-0 over his past nine games. Shesterkin stopped 42 shots on Nov. 8 when the Rangers posted a 4-3 victory over Florida despite being outshot 45-18.

“We played (the Panthers) pretty good so far, we lost 4-3, won 4-3,” Gallant said. “So be ready to compete and battle hard and hopefully get a huge two points (Tuesday).”

Filip Chytil finally returned to practice on Monday. He’s been out since getting injured against the Coyotes on 1/22.

Chytil, 22, was selected by the Rangers in the 2017 NHL Draft in the first round (21st overall). Since debuting during the 2017-18 campaign, he’s bounced between center and wing finding difficulty getting comfortable.

Today at practice he was in the middle of Alexis Lafreniere and Julien Gauthier.

Gallant noted after practice that he wasn’t sure if Chytil would be ready for tomorrow’s game against the Florida Panthers. He’s currently a game-time decision. 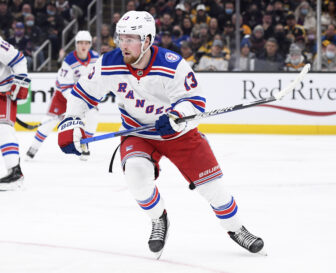 Florida is on its fifth winning streak of at least four games this season and has totaled 22 goals during the current four-game run. The good times continued Monday night when the Panthers rolled to an 8-4 road win over the Columbus Blue Jackets, marking the 20th time they scored at least five goals.

Florida is 14-2-1 since the holiday break and boasts eight players with at least 30 points, including Anton Lundell. The center collected five assists Monday, setting a franchise rookie record, and combined with linemates Sam Reinhart and Mason Marchment to compile 15 points.

Lundell set up all three goals in Sam Reinhart’s fifth career hat trick and also collected assists on both goals by Mason Marchment, whose six points tied the club record set by Olli Jokinen in March 2007.

“We came to play, and everything went our way,” Lundell said. “We knew where to put the puck. This is one night that I will remember.”

Florida’s Jonathan Huberdeau also had an assist, giving him a league-leading 63 points and a two-point lead on the Edmonton Oilers’ Leon Draisaitl.

Aleksander Barkov, who scored a power-play goal for the Panthers, has recorded six of his 21 goals in his past seven games.

The Panthers scored four times in the opening period at Columbus, increasing their league-leading total in first periods to 60 goals. The Toronto Maple Leafs and Colorado Avalanche are tied for a distant second place, each with 49 first-period goals. 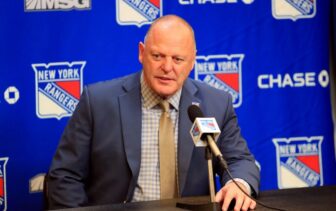 The list now has 27 names on it! Check out who is on it now. Read more.