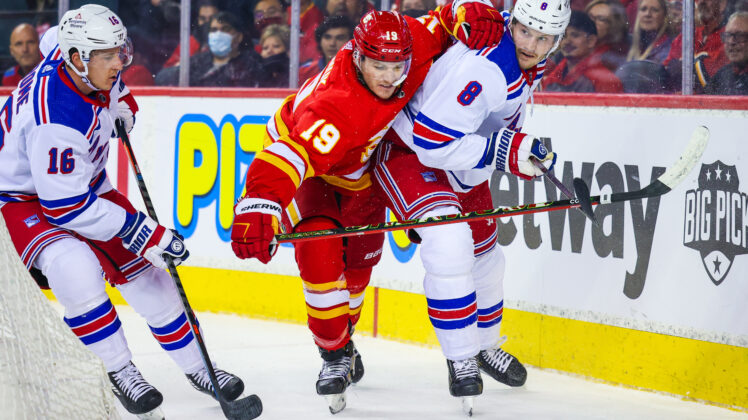 The trade rumors began to fly the moment news broke that Matthew Tkachuk was not going to sign long-term with the Calgary Flames. Every NHL fanbase started fantasizing about the 24 year-old superstar wearing their jersey.

I mean, who wouldn’t want a power forward with skill. In 2021-22, he recorded 42 goals and 104 points in 82 contests. Plus he’s an agitator that knows how to get opponents off their game. Tkachuk is basically a perfect hockey player.

Truthfully, nothing is more fun and intriguing than speculating what it would take to get a superstar on your favorite team. So when the trade proposals started coming in, I think everyone was interested.

Of course, some of these proposals would make even the most wild fantasy hockey general managers shake their heads. And many people forget about that silly little CBA Salary Cap that even eliminates some of the best trade scenarios.

Tkachuk has already given the Flames a list of teams with whom he would sign a long-term contract. Per The Athletic’s report, that includes the likes of St. Louis, Vegas, Florida, Nashville and Dallas. The Rangers aren’t even on his list, and despite the team’s past interest, that should be enough to end any make-believe trade.

Regardless, the reality is the Rangers DO NOT have the cap space to take on Tkachuk’s next contract which is expected to be 7 years and between $8M to $9M per season.

Currently, the team has 5 players heading into the 2022-23 season with FULL NO MOVE CLAUSES. They are as follows:

In total, those players amount to $40.2 million and take up 48.75% of the team’s cap space. So unless you want to trade Adam Fox and his $9.5M cap hit, it’s really hard to give Tkachuk the money he wants.

Per CapFriendly, the Rangers have $4.8M in space remaining with RFA Kaapo Kakko still to sign.

Remember, you need to field a full roster of 20 players each night and have at least two reserves. Any good GM would also leave around $1M for an emergency call up.

Don’t go blaming anyone for the situation

In the aftermath of the Tkachuk news and subsequent realization that a trade to the Rangers would be unlikely, fans began to lament some of the current contracts on the team.

First off, no one was ready for this scenario. Tkachuk is a pending RFA and many felt he would at least sign a bridge deal with the Flames.

The team he’s been most rumored to eventually play for in his career, the St. Louis Blues have just $625,000 in cap space. That means a whole lot of other trades to move out salary in order to accommodate Tkachuk.

Blaming the Rangers for signing or extending players over the last few years is unfair. One Blueshirts that’s drawn the most criticism is Jacob Trouba.

Does Trouba make a little too much money? Sure.

Is it his fault that the Rangers gave him no-trade protection? No.

Is it the Rangers fault? Also no.

That’s the cost of doing business in the NHL these days. New York at the time desperately needed a right handed shut down defender that could play big minutes, and Trouba was it.

At the time, Adam Fox was just a highly-touted prospect and the Rangers hadn’t drafted Braden Schneider yet. And in fairness, you couldn’t project how quickly they both would be excellent NHL players.

Since we are on the topic of being fair, Trouba has been very good for the Rangers. His particular brand of hard-hitting hockey translates well in the playoffs, and he helped turn the Penguins series around by not being afraid to step up on Sidney Crosby.

At the end of the day, if NHL GM’s could accurately predict the future they probably wouldn’t do more than half the moves they make.

Listen, Tkachuk is going to be traded. If I had to pick one place where he’s most likely to land off his list, it would be the Dallas Stars. They have the most cap space available with $11.4 million and the assets to get a deal done.

That doesn’t mean it’s where he will end up. It also doesn’t mean it will be his last stop. Who knows, maybe Tkachuk winds up on the Rangers one day, it just won’t be this summer. But if we’re playing that game, I think the Blues will be his final destination. 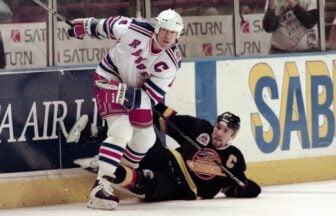