The New York Rangers are set to play the second game of their four-game road trip in Minnesota on Tuesday night.

When they face the Wild, it will likely be Igor Shesterkin again manning the nets for the Blueshirts. It will also be a homecoming for K’Andre Miller, who was born in the Gopher State.

Earlier on Monday, the NHL named Igor Shesterkin the third star of the week.

Igor has started 8 of 9 games coming out of the team’s prolonged All-Star Break, which has some wondering if he will be overworked.

“What does he need a day off for?” Gallant jokingly said. “He can take practice off any time he wants, just like any of my players.”

The head coach stressed that the team is managing their goalies well. All things being relative, between Shesterkin’s groin injury and schedule breaks, he hasn’t played that much.

Gallant also said that Alexandar Georgiev will play some of the 26 games remaining.

“We’re not worried about [Shesterkin] overplaying.” 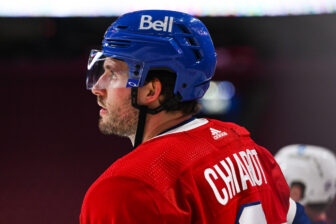 K’Andre Miller is a St. Paul, Minnesota native and looking forward to his first NHL game in front of family in friends.

He’s actually no stranger to skating on Xcel Energy Center ice. It happened twice before as a kid growing up in the Land of 10,000 Lakes.

“I think the only two times I’ve been on this ice was when I was 9 and my mom surprised me with a birthday party and ride on the zamboni,” Miller fondly recalled. “The other was a “Skate with the Wild” when I was like 5.”

Miller, 22, is coming into his own by avoiding the dreaded sophomore jinx. In 56 games, he’s scored 4 goals and 7 assists for 11 points while playing top 4 minutes with partner Jacob Trouba.

“I’m very excited. I have a lot of family and friends coming out, so it should be a fun experience,” Miller said. “My family is really excited to support me. It’ll be really special.”