The New York Rangers have another 50 goal scorer in their organization. Brennan Othmann had an absolute monster game for the Flint Firebirds in the OHL on Saturday scoring 4 times to hit the milestone.

It’s been an incredible season for the youngster, who came into the Rangers 2021 Development Camp and earned himself a tryout with the big club during this past preseason. He put forth a good showing but left knowing he had some work to do.

“You haver to get stronger,” Othman said before heading back to Flint. “You’re playing against guys like (Ryan) Reaves, who is 225 lbs, and if you line match against him and you’re a 180 lbs like me, 9 times out of 10 he’s coming away with the puck.

“If I can throw on another 5 or 10 lbs of muscle and come back with a little more confidence, and play well in the OHL next year, I may have a good shot next year. I think if I can build strength, I think I can turn into a better hockey player than I am now.”

Othmann, 19, was selected by the New York Rangers in the first round of the 2021 NHL Entry Draft. Officially the 16th player selected, he was actually taken at 15 due to the Arizona Coyotes forfeiting pick 11 due to NHL Combine Violations.

This season for the Firebirds, the left wing has been an absolute force. In 66 games, he’s registered 50 goals and 97 points per the OHL’s website.

The kid is nothing short of impressive and was also named the Firebirds captain during the season. He’s also versatile enough to play the opposite wing if needed and plays in all situations. Of his 50 goals, 13 have come on the power play and 4 shorthanded.

Having already established the club record for goals in a single season by scoring 40 back in March, he pushed on and became the franchise’s single season points leader with his 91st point on April 10.

Othmann could’ve eased up to prepare for the OHL playoffs but instead pulled off an amazing feat.

In the team’s final regular season game, Othmann recorded 4 goals to hit the 50 goal plateau. It started just 1:43 into the game when he deflected a shot in front. His next marker was a 5 on 3 power play blast.

Just 17 seconds later, Othmann scored again on the power play after a fake pass to complete the hat-trick.

Finally with 3:49 remaining, Othmann blasted another power play tally for his fourth goal and the incredible milestone.

Othmann ready to take the next step

If the Rangers can get him to play right wing, he could make the NHL jump to the roster much faster. Currently, the team is overloaded on left wing with Artemi Panarin and Chris Kreider firmly positioned on the top two lines.

First overall selection from the 2020 draft, Alexis Lafreniere is a lock to be on the third line next season and is the heir apparent for Kreider’s spot.

Ultimately the Blueshirts prospect pool remains very strong, especially when you consider the young players on the roster. Othmann will have a tough time cracking the lineup next season but looks poised to be an NHL player sooner rather than later. 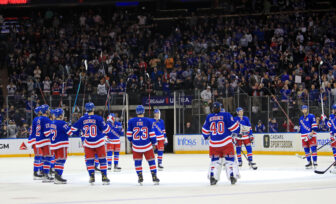 Is Johnny Gaudreau eventually going to price himself off the Calgary Flames? Read more.