The New York Rangers selected forward Jaroslav Chmelař in the fifth-round of the 2021 NHL Entry Draft. Thus far, he’s had an interesting career trajectory and one that requires some explanation. The now 19-year old Czech winger was drafted out of Finland and will be moving to North America this summer to join the Providence Friars in the NCAA.

Growing up in the small town of Nové Město nad Metují near the Polish border, with a population of about 10,000 people, Chmelař played soccer as a kid. However, at a very young age, he caught the hockey-bug when the parents of one of his friends took him to a rink at age 4.

He started playing for his local team, before moving north and made the switch to the Bílí Tygři Liberec academy. Chmelař played there until he was 14 years-old and his dad decided to make a huge sacrifice to move.

Landing with KJT Haukat after a try-out, he ended up playing alongside the son of one of his dad’s friends, so there was some familiarity even though he was many miles removed from his hometown.

In his first season in Finland, he played for both the u16 and u18 team and felt comfortable on the ice. Of course there were big adjustments outside the rink but the young Chmelař took those challenges on and didn’t look back.

“I can understand Finnish although it is a hard language to master. On the ice, we usually stick to English, especially now at Jokerit in Helsinki which has a very diverse group of players. I of course miss my friends sometimes but I don’t regret moving to Finland at all.”

In his second season, he made the move to Kiekko-Vantaa, just North of Helsinki near the international airport. Having made the jump to u18 full-time, the winger put up 22 points in 42 games for his new team and that caught the eye of Jokerit’s scouts who approached him in the summer of 2020.

Still a year removed from being draft-eligible, Chmelař made another step and with 13 points in 15 games in his draft year, he caught the attention of the Czech scouts and he was called up to represent his country at the u18 WJC after a successful couple games with the team earlier in the season. He scored a goal and added an assist in 5 games. His goal came in the quarter finals against Canada where the Czechs unfortunately lost and missed out on a chance to win a medal. But it was a great experience for the kid that pursued a career abroad at age 14.

Following that 2020-21 season, Chmelař was watching the draft with the Finnish family he was staying with at the time.

“I was mostly watching to see if my teammates got picked. I was really happy when I saw my name on screen. I couldn’t believe it,” he said of the experience.

Right after he was picked by the New York Rangers, the then 18-year old received a phone call from a fellow Czechia player.

“Filip Chytil called me right after the draft to congratulate me. He told me to enjoy the moment because the hard work starts now.”

Due to the pandemic, Chmelař saw his season heavily impacted with games being postponed last-minute and sometimes even cancelled. His first full season at the u20 level in Finland didn’t see him keep up his production from previous age-levels but it earned him a call-up for the Czech u20 team ahead of the World Juniors in Canada last December.

Chmelař traveled to Edmonton and Red Deer and was part of an expanded roster ahead of the tournament. Unfortunately, he was one of the final cuts but he still cherishes the opportunity.

At the end of the season, news broke that the young Czech winger would move to North America to go the NCAA-route and join Brett Berard in Providence. When asked about the decision, it seemed pretty clear why Providence won the race for his signature.

“There had been some other offers from different colleges,” he said. “But this feels like the best fit for me as they were also the most excited about it adding me.”

Versatility, David Pastrňák and the number 42

When asked about his abilities and style, Chmelař focused on versatility.

“I play right wing but also feel comfortable on the left,” he noted. “The biggest challenge on the left is defensively, with the puck on your backhand, but it’s just a minor thing. I use my size really well on the boards but am also a good skater. I didn’t really notice much difference between the smaller rinks in Finland and the ones in the Czech Republic. Now that I move to North America, the rinks are a bit smaller again. I can tell you more about that next season.”

Growing up, Chmelař’s favorite player with a similar journey, David Pastrňák. He also moved at an early age to chase his hockey dreams.

“David Pastrňák was my favourite player growing up,” he said. “I am not the same kind of player but I do look at him and try to learn from him a lot.”

My final question as always is a familiar one to people who read these interviews. In Finland, Chmelař plays with number 42 which seems like an odd number to pick. So what is the story behind it?

“My favourite number is 42 because my grandpa was born in 1942 and he had a really big influence on my life outside hockey. It’s my way to honor him,” he respectfully answered.

It’s an explanation that hits home for me personally. Despite being 19 years older than him, we both have a grandparent that meant a lot to us, who was born in 1942. My grandmother took me in and looked after me the first few years of my life while my parents struggled. As a kid I never really put too much thought into it but as I got older it explained why I had a much stronger connection to my grandparents than my brother had.

To hear someone honoring their grandparent by picking their birth year as their jersey number was a really nice way to end the conversation we had.

I want to thank Jaroslav “Jarin” Chmelař for sitting down with me and giving me the opportunity to share this story with our fanbase. 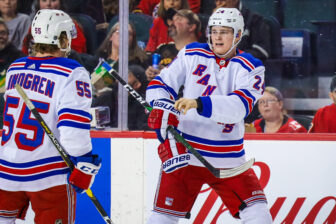