There are many prospects over the years in the New York Rangers system I’ve had the chance to talk with but I never got around to having a chat with Riley Hughes, who I sometimes refer to as “the forgotten one.”

The winger was selected in the final round of the 2018 Draft and is entering his senior year in college. He’s also looking to earn his entry level contract for next year.

Let’s get to know Riley Hughes.

Riley Hughes and the road to college

Riley Hughes was born in Massachusetts and is the son of current Montréal Canadiens GM Kent Hughes. He played for the Boston Jr Eagles and St. Sebastian’s in high school. His father grew up in Quebec but moved south of the border to play college in Vermont. His uncle Ryan Hughes was a 2nd round pick by the Quebec Nordiques and played college hockey for Cornell but unfortunately had to retire due to back injuries.

Prior to being drafted, all the way back in November 2017, Hughes spoke to several colleges including his uncle’s former school Cornell but ultimately, the choice fell on Northeastern.

“College hockey definitely runs in the family so it was an easy decision to go that route,” Hughes explained. “When I visited them, I had a good conversation with the coaches. They showed me film breaking down my play and what to improve on. It was very professional and I really liked their approach.”

After picking Northeastern, Hughes still had a year left in high school and his commitment was for the 2019-20 season, almost two years into the future at that point.

Going into the 2018 draft, Hughes played a handful of games for the Sioux Falls Stampede in the USHL and he had the option to go back for a year before going to college. However, Hughes chose a different option. He went to the Victoria Grizzlies in the BCHL. He got the play with current Colorado Avalanche center and new Stanley Cup champion Alex Newhook.

We were the two kids on the team and gravitated towards each other. We’re good friends now and playing with him was really fun. I learned a couple things from him as a person, as a leader

In the summer of 2018, Newhook moved to Boston as well to play for the Boston College Eagles. He spent the summers at Riley Hughes and his parents.

“He’s a kid from Newfoundland, Canada so he was new to the area. He stayed with us for a while and to this day, we still train together during the off-season,” Hughes revealed. “He bought an apartment in South Boston now.”

Getting drafted by the New York Rangers

Riley Hughes did not attend the 2018 Draft in Dallas. He knew there was a chance he could get drafted but opted to stay home. The Rangers did not have a 7th round pick going into the draft as they had included that pick in the Brassard for Zibanejad trade a year prior.

The Rangers swapped 7th round picks using a their 2019 selection for a 2018. What’s wild is that somehow in a 31-team draft, both 7th round picks ended up being 216th overall. The Rangers used that 7th rounder to draft Riley Hughes who was working out back home that weekend. His dad was at the draft as an NHLPA agent and called Riley the moment the pick was announced. He received a phone call from Jeff Gorton right afterwards and was welcomed to the organization.

In the summer of 2019, Hughes officially joined the Northeastern Huskies and started his college career. The first year was a big adjustment. The difference in pace was noticeable and Hughes didn’t have the upper-body strength to play the same style he was used to in high school.

Hughes felt more comfortable in his second season and now he’s one of the leaders on a very good Huskies team. He proudly wears the A as one of their alternate captains.

The other Jack Hughes

Hughes isn’t the only son of Kent who hopes to reach the NHL one day. Riley’s younger brother Jack is draft eligible this upcoming week.

Yes, that’s right. There is another Jack Hughes.

Jack and Riley played this past season together at Northeastern. “We played together for the first time this year and our parents attended almost every home games,” Riley notes. “It’s a special feeling seeing not one but two kids on the ice together. We were even on the same line for big chunks of the season.”

When I brought up his younger brother being “the other Jack Hughes,” Riley couldn’t help but laugh. “I won’t tell him you said that,” he shot back. Where Jack Hughes ends up, will be known in a few days when the 2022 draft kicks off on Thursday, July 7.

Riley Hughes and the number 4

In Boston, Riley Hughes wears number 19 but as a kid he always picked number 4. So what’s the story behind that switch?

“When I was 9 or 10 years old, I picked number 4. I used that number for the junior Eagles but when I got to high school that number was no longer an option so I switched to number 19,” he explains. “In the USHL I used my dad’s old number 24 because 19 was taken.”

It’s interesting that the Rangers have two wingers in college who have a preference for a low number. Berard loves playing with number 6 and Hughes prefers number 4. Who knows. Maybe we will see them wear those numbers at the Garden one day.

Riley Hughes has 1 year left in college before his NHL rights expire, so this upcoming season is do-or-die for the winger.

His biggest strengths are his speed and ability to get down low to battle for the puck. The type of gritty player that you need in hockey. It’s still a long road ahead but so far it’s been a great experience for Hughes playing in Boston. He’s close enough to home that he doesn’t have to be without his family, something other players really struggled with during the pandemic.

“A lot of players didn’t get to go home for Thanksgiving or Christmas,” he said. “Especially the international kids weren’t able to see their family for a whole year, or even longer. It was brutal for them.”

It’s a somber reminder of the last two years we lived through. We are slowly getting back to a normal way of life and with the draft being hosted in an arena again, stands filling up for games, those long years are hopefully finally behind us.

Time will tell if we see Riley Hughes in a Rangers jersey in the future, but I am happy I had the opportunity to sit down with him and get his story out.

PS: I want to thank Riley Hughes for sitting down with me and giving me the opportunity to share this story with our readers. 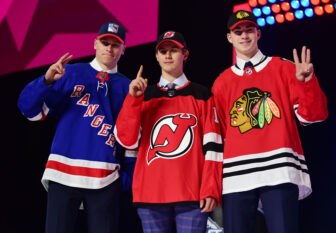