“I don’t really have any update on it,” Drury said per NY Post’s Mollie Walker. “Obviously, we think he’s a real good player. We drafted him. We’ve worked with him the last number of years. We certainly hope he’s here next week.”

One thing Drury did not address was Lundkvist’s request for a trade which was confirmed to us by his agent Claude Lemieux on September 1.

“We did request a trade when Nils was sent down last year,” Lemieux said. “We hope something can get done in the next few weeks.”

While the Rangers are hopeful he shows up to camp, that has yet to be decided. As far as what’s known, he’s likely still in Sweden with training camp set to open next Wednesday for the big club.

If he does participate, it will only help his value and chances for a trade before the start of the season in October.

As for the defense, the right side is basically set with Adam Fox, Jacob Trouba, and Braden Schneider. On the left, there is one open spot behind Ryan Lindgren and K’Andre Miller.

Zac Jones and Matthew Robertson are both at rookie camp fighting for that spot. Veteran Libor Hajek will also try and make a push for the position.

There was talk that the Rangers may look for a veteran left defenseman on a PTO, but that’s becoming less and less a possibility.

“We’re still actively looking at some PTOs for defensemen,” Drury said. “I think we’re pretty comfortable right now with who we have back there.”

In commenting on the situation, Drury noted that even if something doesn’t pan out they could always make use of the waiver wire early in the season.

At this point, there’s very little on left defense out there unless Keith Yandle is a consideration.

When it comes to the battle up front, there’s some flexibility on who makes the bottom six. Enter in former Rangers Jimmy Vesey, who will be at camp on a PTO.

Vesey, 29, registered 8 goals and 15 points in 68 games for the New Jersey Devils last season. According to Drury, it was watching him up close that made him interested.

“The things he was able to do really well for Jersey last year excited us,” Drury relayed per USA Today’s Vince Mercogliano. “Bottom six, big guy, physical player, had a really good year on the PK. He’ll get a chance here to show us what he can do.”

If Vesey makes it, he’s expected to play hard and physical. Of course, the Rangers have players like that in Dryden Hunt and Sammy Blais already. The key for Vesey to make the team will be his abilities to kill penalties.

Something the Rangers got hit hard on when both Kevin Rooney and Tyler Motte left via free agency. 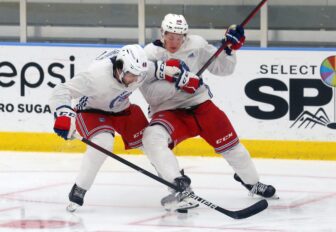