Rangers recall Zac Jones, Kaapo Kakko back in the lineup 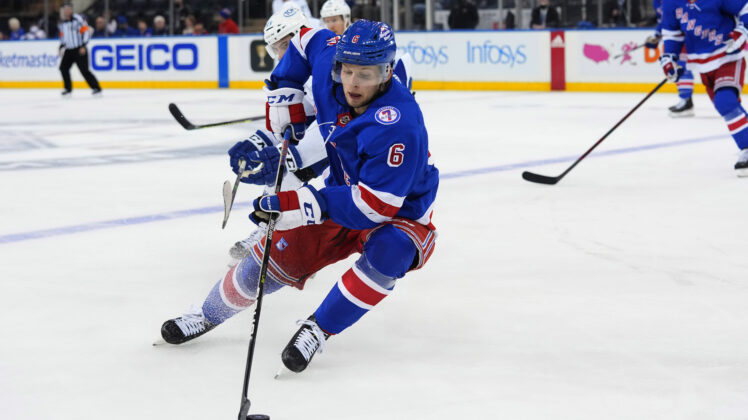 The New York Rangers have called up defenseman Zac Jones, who is with the team and likely to suit up tonight against the Montreal Canadiens.

Jones, 21, was selected by the Rangers in the third round of the 2019 NHL Entry Draft. He has spent some time with the big club this season registering 2 assists in 11 games. With the Hartford Wolf Pack, he notched 9 goals and 35 points in 52 games to lead all defensemen.

“It feels great (to be back),” Jones said. “It was a great experience for me to play with (the Wolf Pack). Eventually I’ll be up here (full-time). When it comes it comes.”

Jones skated today with all the extras in preparation for the Habs. That included Kaapo Kakko, who will be reinserted back into the lineup per head coach Gerard Gallant.

“It feels really good to be back,” Kakko said. “I think the game against Philly where I got a couple of goals, I played better. It’s good that I have a couple of games before the playoffs (to get ready).”

Everyone that played last night did not take part in the optional skate. Gallant has yet to finalize his lineup against the Canadiens but indicated there will be changes.

“We have an opportunity here to rest some players,” he said. “I’m not going to tell you who but there’s going to be some surprises.”

Officially listed as out are Andrew Copp and Artemi Panarin. They each suffered a minor injury against the Carolina Hurricanes and left in the second period. Both players could have returned but Gallant kept them out for precautionary reasons.

There’s a chance both could be available for Friday against the Washington Capitals in the season finale.

“If they don’t play Friday it won’t be because they’re injured,” Gallant said.

In the playoffs there are no roster limits and no salary cap. However, a player must be one of the 50 contracts with their rights belonging to the team prior to the NHL Trade Deadline in order to be eligible.

The Wolf Pack season officially came to an end on April 24, and there are several players that will likely join the Rangers for the postseason. The list of potential additions is as follows: 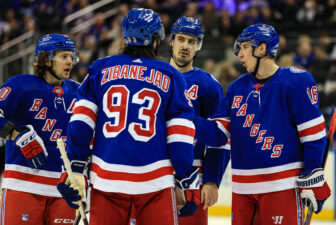 Patrick Kane seems to be on board with the idea of a Chicago Blackhawks rebuild. Plus could Patrice Bergeron leave Boston for Montreal? Read more.