The New York Rangers are back to work and should be playing the Florida Panthers on Wednesday after a long layoff due to postponements and an extended holiday pause.

Yesterday, the team announced their COVID-19 protocol list which now includes Ryan Lindgren and Alexandar Georgiev. Patrik Nemeth has been on protocol since December 18th.

Rangers getting in practice time

The Blueshirts hit the ice at the MSG Training Center after all players completed their COVID testing that landed Lindgren and Georgiev in protocol.

Igor Shesterkin was back in the starter’s net and looked ready to resume the lion’s share of games as the #1 goalie. Due to COVID issues, Adam Fox was paired with Libor Hajek and Nils Lundkvist partnered up with Jarred Tinordi. Jacob Trouba and K’Andre Miller remained as a pair.

“We just go out there and practice with whoever’s there and do our thing,” Gallant explained about the uncertainty of the schedule. “You prepare the best you can. So you just go out and practice and have some fun on the ice as we did today — Be ready when the time comes.”

The Rangers were supposed to face the Detroit Red Wings today but instead will hold another practice at 11 AM.

The New York Rangers are down to four players at the World Junior Championships as Czechia cut Jarin Chmelař before the tournament began.

Canada won their opening matchup 6-3 against Czechia as they were led by 2021 first overall pick Owen Power, who registered a hat trick. Rangers prospect Will Cuylle did not collect a point in the contest. Dylan Garand, whom the Rangers recently signed to his ELC picked up the win but gave up three on 17 shots.

The U.S. squad beat Slovakia 3-2 in a tough contest. Rangers prospect Brett Berard did not find the scoresheet. New York’s other prospect, Kalle Väisänen of Finland also didn’t notch a point as his team beat Germany 3-1. 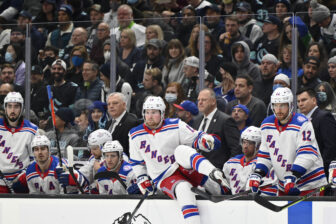