The Rangers head coach Gerard Gallant is doing the media rounds after his official introduction by the organization. He’s been interviewed for a detailed Q&A by the NY Post, and was on with Bruce Beck of NBC late Sunday evening.

Below is the video clip of his appearance on NHL Network via Twitter:

He was brought in to win, and to make the playoffs and he stated that clearly to the NY Post late last week.

“Well, I want to win a Stanley Cup,” Gallant said. “I never won a Stanley Cup. I enjoy the game, I still have a lot of fun coming to the rink, and I got two grandboys, 4 and 5 years old, and they’re pretty happy to see grandpa coaching an NHL hockey team.”

One of the top targets in free agency that Chris Drury should look at is Islanders center Casey Cizikas. Yesterday as the team was conducting break up day interviews Cizikas did not want to talk about it. “That’s a conversation for another day,” he said. “I think right now, I’m just focused on being with the guys, spending these last few days before everybody heads their own way.”

His line mates Matt Martin and Cal Clutterbuck both want him to stay but realize the business side of things. Head coach Barry Trotz seemed to have a more definitive opinion. “He’s an Islander,” he said with authority. “You know it and I know it.” 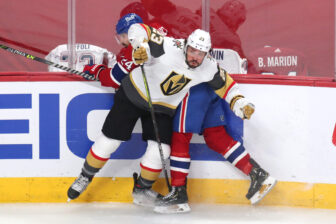 Catch up on all the Rumors from last week here.